This Bronze Age archaeological site lies on the very edge of the western border of the parish some 900m from Calverton and Lower Weald.  When investigated by Northamptonshire Archaeology prior to gravel extraction, it was found to contain a group of four ring ditches, presumed to be levelled Bronze Age round barrows which formed a linear cemetery on low-lying ground adjacent to the River Great Ouse. The excavations also revealed an alignment of some 90 late Bronze/early Iron Age pits running East -West across the southern part of the site. 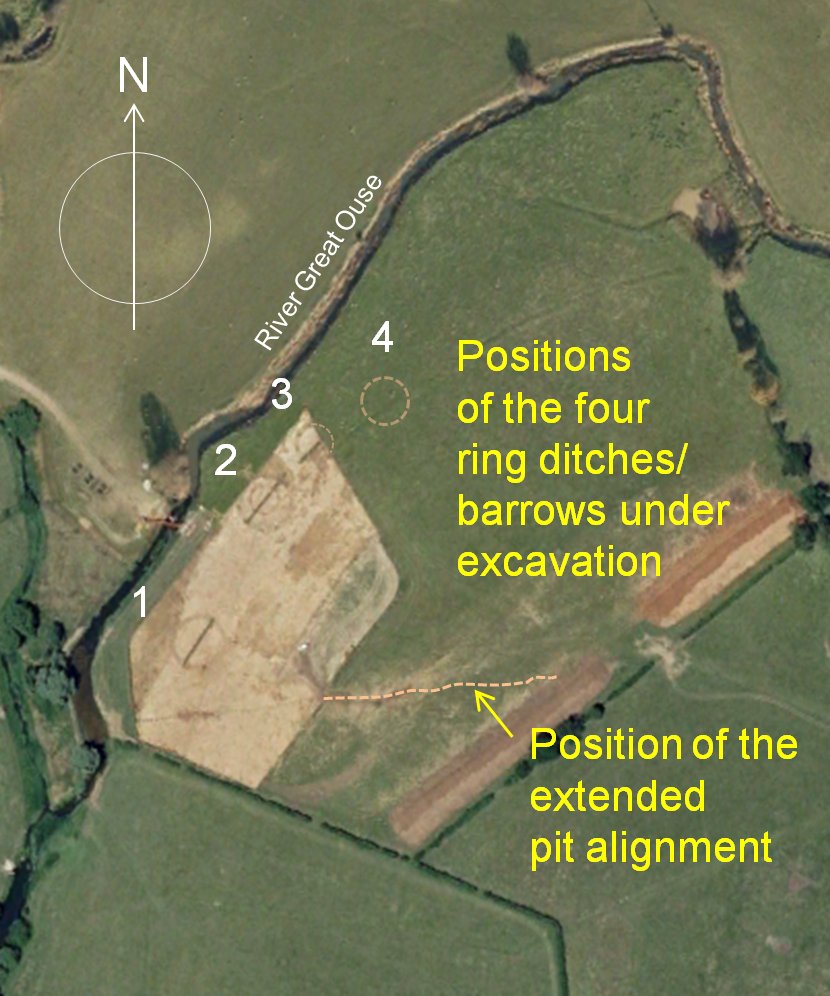 The accompany aerial photo shows traces of three of the ring ditches revealed during the excavation of the sandy coloured area and the position of No 4 (unexcavated at the time of the photo). Nos 1,2 and 4 were all around 30m (100ft) in diameter whilst No 3 was smaller at 22m (70ft).  Interestingly No 2 was double-ditched and with the inner ring some 16m (50ft) in diameter. Within one of the ring ditches the natural earth surface was raised and domed, suggesting that the former central mound had only been fully ploughed away in recent times. The other two had probably been so in antiquity. When excavated the ditches were around a metre deep, but no contemporary internal features had survived and it must be assumed that all traces of any former burials had been lost to ploughing. The absence of any deeper central graves suggests that the primary burials are most likely to have been cremations, which would suggest that the barrows were probably constructed during the first half of the second millennium (2000-1400 BC).

Part of a previously unknown pit alignment was also exposed, running roughly at right angles to the river just beyond the southern end of the barrow group. A total of 42 pits were investigated, and geophysical survey at that time  indicated that the alignment continued beyond the excavated area. 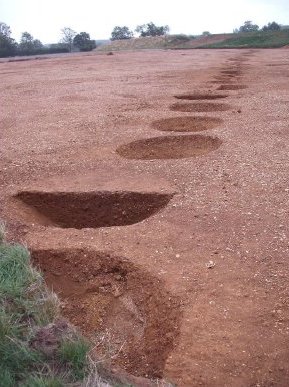 The pits were generally circular or oval in plan, and around one metre in diameter and up to a metre deep.  The upper fills of most of the pits contained residual early Iron Age pottery, with around 1000 pottery sherds recovered. At the time this suggested that there was likely to be an associated domestic settlement nearby, which may have been a precursor to known middle-late Iron Age and Roman settlement that was also located by geophysical survey and confirmed by subsequent excavation to the immediate east of the investigated area. A total of 45 pits lay within the extended pit alignment (dotted line ). The line of pits formed a direct easterly continuation of the 47 pits excavated in 2006 (faintly visible across the left of the excavated area in the aerial photo) and making a total alignment of 92 pits. These can also be seen in their excavated and cleaned forms in photo on the right (the second and seventh pits were excavated to reveal  flat vertical cross sections to help interpret their dug profiles and subsequent fills).

Interpretation of the pit alignment

Pit alignments, which are widespread within the East Midlands, are generally thought to have functioned as some form of territorial boundary within the late Bronze Age to middle Iron Age. In common with other examples such as at Gayhurst the pits seem to have been dug in small groups, indicated by slight changes in alignment and morphology (shape/form), possibly by individual teams of people.  The pits appear to have been left to silt up naturally, with some deposition of pottery, charcoal and bone in the upper, disuse fills. The reasons behind this are unclear since the material would have had to be brought to the pits from some distance away.

Ring ditch/barrows and Pit Alignment text  from a report by Ed Taylor, and text covering the later investigation of the extended alignment by Charlotte Walker – both of Northamptonshire Archaeology.