The 1843 Lloyds Bank map was the first large scale detail map found referring to Calverton. It was was an early piece of research by Keith Hope-Lang for the ‘Calverton Historical Bulletin’ and is reproduced here from that publication and the original website but now as a fully interactive map with additional text and accompanying illustrations. The photo below shows the area covered by the map some 90 years later but with the majority of the buildings still standing.

Lower Weald ‘Main Street’ c.1930 looking East. The house with the prominent gable-end in the centre of the picture formed part of the Lower Weald Farmhouse (although by the time this picture was taken, it had become the village Post Office)  The tallest building behind is the large hay-barn which was built over part of the former cattle yard but some time after the map was drawn . The houses in the distance on the right were also later additions to the plot marked Charity Cottage Gardens (opposite lots 3 & 4).

It is always interesting to find examples of early maps and, although restricted in its coverage, the Lloyds Bank’s  map of a part of Lower Weald, shows a number of buildings long since lost. It is titled the Lower Weale Estate, presumably the estate was for sale or maybe held as collateral for a loan. It is currently the earliest detail map that we have for this area of Lower Weald and includes (from the right) what we now think of as Old Pound Barn and Causeway House along along with their associated outbuildings. There then appears to be a continuous street frontage where the semi-detached cottages Nos. 18-19 Lower Weald now stand and finally the terrace of four cottages Nos. 20-23 Lower Weald.  With the exception of the last four and although now much altered,  these standing buildings formed the core of Lower Weald Farm. This was one of the smaller holdings of the Egmont Estate which was finally broken up into 30 lots and sold by auction at the Calverton Estate Sale in 1933. 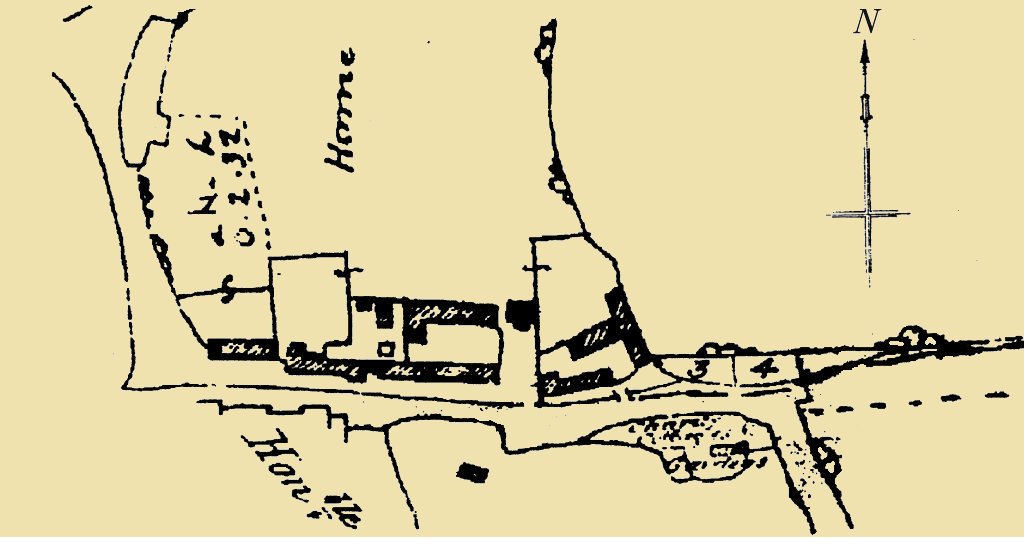 Starting from the right (next to plots 3 and 4) the map shows the first of the lost buildings associated with the Rick Yard. This is the substantial ‘T’ shaped structure with at least one section of it being an open-fronted byre or hovel as evidenced by the bases of three brick piers which were found some 12m (40ft) behind the roadside building which confirmed the existence and position of the earlier structure. Looking at the roadside building (now Old Pound Barn), it can be seen that the western section projected slightly to the rear. This represents the original square shaped barn which was later extended in a slightly narrower form eastwards along the road frontage as a 6 bay hovel open to the yard on its northern side. Subsequently the square shaped barn was reduced in depth to bring it in line with the extended section, although part of its outer wall survives as a boundary wall – a theme which repeats in respect of several neighbouring  buildings.

Partially constricting the access driveway to Home Close, the map shows a square-shaped building with a front projecting bay which has been identified from the Estate sale plan as a ‘ Harness Room with Loft’. Its intimated two storey construction is confirmed in the aerial photo and its walls survived to a height of about a metre (3.1′) right into the mid 1980s.

The map then shows a pair of parallel long buildings facing each other across an enclosed Cattle Yard. These buildings are identified as stables and loose boxes with a 9 bay animal byre (known locally as a hovel) opening on to the yard from the north with a short extension towards the road making it ‘L’ shaped. This latter building was subsequently extended to the roadside boundary wall. However the large the large Hay Barn (now Causeway House) which appears in the photos at right angles to the road was  built some time after the date of the map, although it did again incorporate part of the south wall of the roadside building the remainder of which was partially taken down leaving just its southern wall to survive as the present boundary to the Yard. All these were originally agricultural buildings and used as barns, cart or animal sheds, stables, loose boxes or byres most of which were open-fronted with oak uprights or round brick piers supporting the roof eves as can still be seen today in the surviving buildings here and at Rectory Farm immediately to the south.

To the west of the Cattle Yard the map shows two adjacent enclosed plots which have surviving semi-detached cottages known as Nos. 18 & 19 Lower Weald on them. These cottages were knocked through internally to form the Farmhouse. However the map shows  a continuous range of buildings fronting the entire roadside across the width of both plots. The roadside buildings of the first plot immediately adjacent to the Cattle Yard appears to a suffered the same fate as the other southern range buildings in being reduced to just a boundary wall. However the fate of the original and subsequent farmhouse in the left hand front corner of this plot is more complex.

The other lost Buildings

In the field opposite the farm (at the bottom of the map) a small unattached building is shown which is no longer there. This could well have been a field barn or perhaps another of the medieval crofts similar to those found to the right of this position in the middle of the field during the village archaeological dig in 2000. There was no indication of these other medieval buildings on any map but their foundations were clearly visible in trench 2 of the village dig. In the bottom right hand corner of the aerial photograph, the more substantial Rectory Farmhouse can be seen. This undoubtedly existed in 1843 but only part of the frontage to the road is actually shown in the map.

So it is reasonable to assume that everything else shown on the map is accurate, in other words all the buildings within the estate are shown correctly? Probably yes, but it is also wise to draw no conclusions about detail outside the estate boundaries; if a building is not shown then maybe that is because it was of no interest to Lloyds Bank in 1843 or maybe the building had fallen down before that date and the remains used elsewhere. Only further maps, or further digging will tell us more.

Based on an original article by Keith Hope-Lang.