A local spring with health-giving properties. 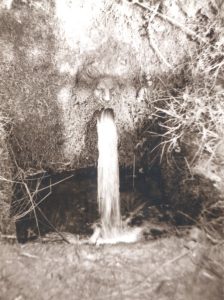 Gorrick’s Spring with the health-giving waters gushing from the original cast-iron Lion’s Mouth in 1938.

This freshwater mineral spring goes by several names. The more modern one calls it the Lion’s Mouth after the edifice from which the water issues. However the original cast-iron Lion’s Head spout was not installed until around the 1930s. It was subsequently stolen (presumably for its scrap metal value) but was replaced by a similar sized stone version by Calverton Residents’ Association in 1993.

Local author, Audrey Lambert, described it in her book ‘Around Stony Stratford’ as being located “Near the Cross Hills Bridge on the road leading to Calverton, ‘Gorrick’s Spring’ waters gush from the lion’s mouth. In years gone by the monks of Stony Stratford, who lived where ‘The Retreat’ now stands, deemed this wayside spring to be sacred, possessed of healing properties, and they used the waters to cure their ailing flock.”

There is an earlier name which may also be attributed – describing it as – ‘A chalybeate spring, called the Bloody Hawk, was formerly much resorted to by persons who, on those occasions, formed groups for dancing to the violin’.

This sounds a lot more fun than the rhyme normally associated with the spring:

However there’s no denying the health-giving properties of chalybeate waters, with one doctor claiming they would cure:

“the colic, the melancholy, and the vapours; it made the lean fat, the fat lean; it killed flat worms in the belly, loosened the clammy humours of the body, and dried the over-moist brain.”