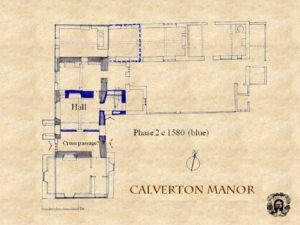 Archaeology covering this period is usually associated with unpicking the various building developments which were happening within the village. Some of the earliest work was dominated by the alterations and improvements not only to the Church and Manor House, but subsequently to the more modest cottages too.

From around 1500, Calverton Manorhouse was steadily extended not only outwards, but upwards too as the upper storeys were brought into use and a dramatic copula added to the ridge. Elsewhere in the village similar activity was going on, although on a very much less grand scale as villagers sought to so find more space to alleviate their crowded conditions. In their cases, restricted ground plots meant that the only direction they could go was up, so we see many instances of the older cottages having their roof spaces opened up in the modern equivalents of loft conversions. 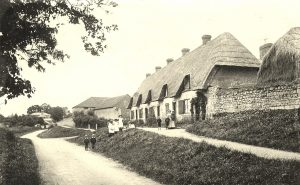 Manor Farm Cottages are probably the most visible and well-known example of this and also possibly represents some of the oldest standing remains (up to eaves level)  within the village.

When unsuitable for improvement or simply not needed, many cottages and agricultural buildings were lost, although when built of stone, much material was saved and used elsewhere. This process leaves no historical trace although research has shown that many of the taller boundary walls within the village are actually the standing remains of previous barns or agricultural buildings, slightly reduced in height and with their tops protected by the typical ‘cock and hen’ pattern of upright stones set on edge in a bed of mortar. 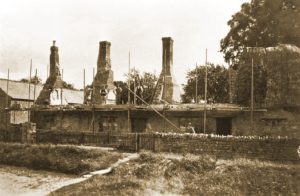 The general building improvement continued throughout the last century with complete roofs being being rebuilt at a greater height to create upper storeys, typically with tile hung walls. At the same time, advantage was normally taken to upgrade the roofing material from thatch to slate or tile. The results of this process can be seen to particularly good effect in the terraced cottages facing each other across the main street in Lower Weald. 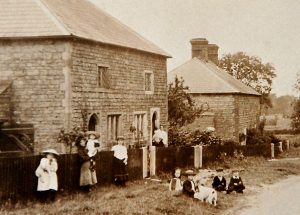 Elsewhere, better quality ‘estate’ cottages were being built generally on new sites to house the farm workers required by the tenant farmers of the large landowners (In Calverton parish the Lords Carrington and Egmont held most of the land between them). The Cottages in the picture were both part of the Egmont Estate and the 1933 Estate Sale catalogue described the nearer as a ‘Pair of Stone and Slated Cottages each containing Three Bedrooms and Two Rooms downstairs; Garden and Two Barns. Wash-House used in common. Water Supply from well on the opposite side of the road.’ Previously Nos 13 & 14 and 15,16 & 17 Middle Weald, both blocks have now been converted into single dwellings (Egmont and Saddlegate) with considerably more convenient facilities!