Walk down the street a short distance and to your right is the entrance to TICKFORD ARCADE. This arcade of small shops was built into the town’s former cinema THE ELECTRA which was opened in 1912 by the owner of SALMON’S COACHWORKS for the benefit of the employees and their families.

The cinema closed in 1983 owing to competition from new cinemas in Milton Keynes and was replaced by the arcade of shops in 1991. The architectural style of the arcade is worth a good look.

DID YOU KNOW?
St Johns Street looked like this in the 1950s, before the left hand side of the street was demolished. 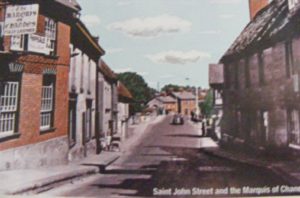 Further down the slope of St John’s Street is YE OLDE KIOSK, number 26.
This is one of the town’s oldest buildings and was named YE OLDE KIOSK, when it became a sweetshop in 1971. Built of timber with brick infill it is early 16th century and possibly Tudor. Note how narrow the building is and has only one window per storey and a gable end overhanging the pavement, characteristic of building of the 16th century. The building was occupied recently for many years by a shoemaker and cobbler named Albert Lyon. Now in 2019 it is an Estate Agent.
Walking towards THE TICKFORD BRIDGE, the next points of interest are NUMBER 32 AND QUEEN ANNE’S HOSPITAL.
The QUEEN ANNE’S HOSPITAL building is the fourth such premises on this site, the original being 13th century. There is a plaque above the first floor windows set into the wall dedicating the building to the people of the town by the grace of Queen Anne, wife of King James 1st. A former building on the site may well have been a leper house built by John de Somerie dedicated to St John, hence the name of the street.
Queen Anne
DID YOU KNOW?
Anne of Denmark lived from 1574 until 1619. She was Queen Consort to James I. She was the daughter of Frederick II of Denmark and Norway. In 1589, aged just 15, she was married to James, then James VI of Scotland. In 1603 James became James I of England. The couple had 8 children, but only 3 made it to adulthood, owing to high child mortality at that time. Her Roman Catholic leanings caused James all sorts of problems during his reign, as James was Protestant. She spent huge sums of money on court entertainments, lavish clothes and costly building projects, causing James financial problems. She died in 1619 in her forties at Hampton Court Palace and was buried in Westminster Abbey.
Alms houses have over time been set up to help people, usually the elderly or poor of a district, who can no longer work to earn enough to look after themselves. Alms houses are usually managed by a charity or a trust.
Nearby back up the street is Number 32.
Number 32 is an ancient building, which was once the Vicarage until 1875. At the rear is a medieval stone wall, once part of a Tudor building.
Now onto Newport Pagnell’s famous and unique iron bridge adjacent to the hospital building. It is TICKFORD BRIDGE and has a plaque on it to state that it was built in 1810. It replaced an earlier wooden bridge and is the oldest cast iron bridge in the world still carrying daily traffic. It was originally a toll bridge in order to meet the costs incurred. It was built to take traffic over the RIVER OUSEL/LOVAT.
The original ford became a vital crossing on the route from London to Bedford, Northampton and onwards as well as for people living around about. The bridge built became known as the ‘Tickford Bridge’. (‘Ticcen’ was an old name for a young goat). As for the iron bridge we see today the design was based on the Wearmouth Bridge. One of the men involved, Thomas Wilson chose Walkers of Rotherham, leading ironmasters in the country to make the Tickford Bridge. The first stone abutments for the bridge were put in place in June 1810. As can be seen it is a single arch of cast iron, 60feet in span. The stone abutments are of the same stone as the North Bridge. (It probably only took two weeks to erect.) Once the bridge was in place the road was built over it and the end walls set in place.
Once across the bridge walk along Tickford Street past the turn into Severn Drive and on to ASTON MARTIN’s new showroom. Production of cars ceased here in 2007. The present site is a service/showroom enterprise. The original works on this site and across the road were those of Salmon & Sons founded in the 1830s by a local man called Joseph Salmons. He started a coachworks, where there had formerly been a farm. Later the firm became Tickford. Afterwards the site became part of the Aston Martin Lagonda organisation, producing the famous Aston Martin range including the James Bond cars.
Opposite this 21st century building are the three conserved buildings from the company’s past life. Currently undergoing work by the owners of the new housing estate on what was the factory ground.

For the history of Aston Martin look at the following website:-
www.amht.org.uk

The final destination on this walk is TICKFORD ABBEY. To get to this site you will need to walk back to the roundabout and turn right  into PRIORY STREET, which gives a good clue to the approach to the ABBEY site. Follow the street along its full length and you will reach your final location of this walk. 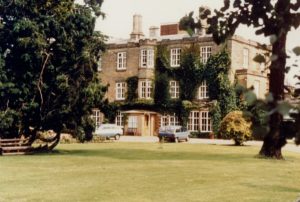 TICKFORD ABBEY is now a private nursing home. The present building is on the site of an ancient priory. The Priory was originally a medieval monastic house set up in 1140 by the then Lord of the Manor of Newport Pagnell, a man called Fulconius Paganel. It was part of the religious Cluniac Order centred in Tours, France. In 1524 Cardinal Wolsey gave the Priory to Christ Church College in Oxford along with all its wealth. In the early 18th century some of the Priory buildings still remained as ruins. Around 1767 Thomas Hooton built the present property as seen today. There is a family vault at the rear in the area of the Priory Burial Ground. Also to be found is a tall obelisk erected by Hooton in memory of his wife Sarah and a gazebo, having been modernised, that stands by the adjacent River Ouse.            Both obelisk and gazebo are listed ancient monuments.