There is some evidence for prehistoric activity within Olney. The main source of information has been derived from archaeological investigations at the Cowper tannery, where Neolithic and Iron Age features and artefacts were revealed during excavation. Further Iron Age activity was found during excavation at Aspreys, which revealed a pit alignment inferring a burial ground. Apart from these two sites the majority of evidence for the prehistoric period comes from the landscape surrounding the town.

The most notable find was surely that of the remains of the Cetosaurus Oxonensus (whale lizard) in a quarry near Clifton Reynes. (See the notes on the sketch below). This dinosaur dates from the late Jurassic period around 167 million years ago. 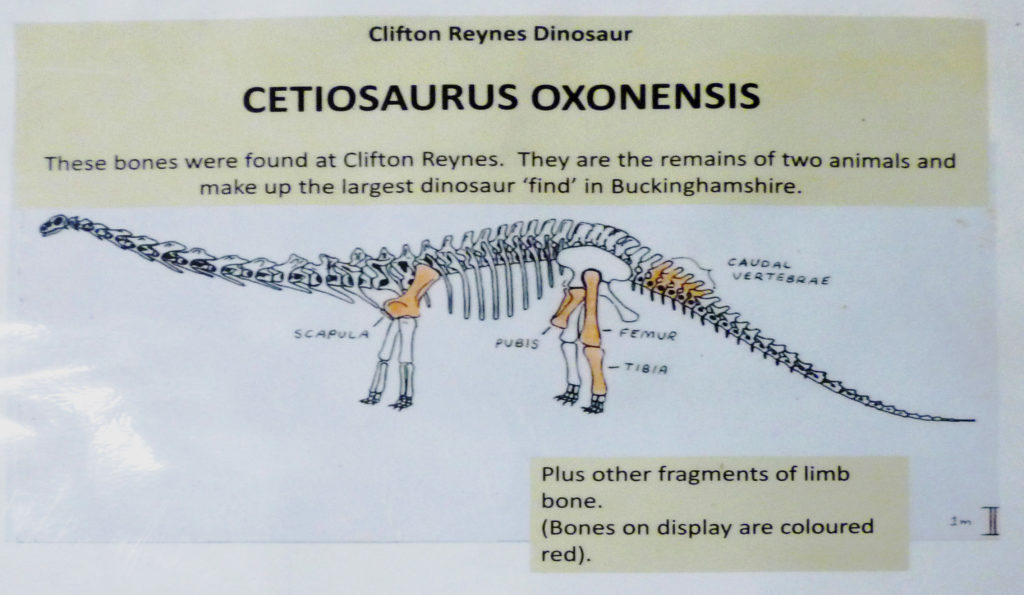 A section of limb bone, about 25 cm across, from the remains of the two animals found at the Clifton Reynes site is shown below. 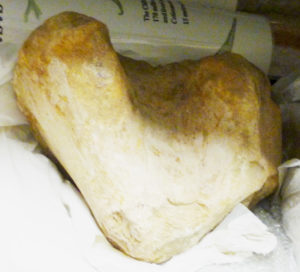 Another local find, in the gravel pits at Emberton, was two horn cores of the Auroch dating back to the Holocene age, possibly as far back as several thousand years ago but probably much less than that. (See images below.) The Auroch is an extinct type of large wild cattle that inhabited Europe, Asia and North Africa. It is the ancestor of domestic cattle. The species survived in Europe until the last recorded Aurochs died in the Jaktorów Forest, Poland in 1627.

A horn core of the Auroch

What a Auroch probably looked like based on excavated skeletons 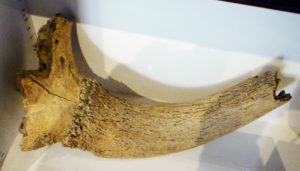 Another horn core of the Auroch

It appears that the landscape around the river Ouse at Olney was well utilised in prehistory. Aerial photographs of the area have shown evidence of a number of ring ditches, the majority of which are located in close proximity to the river and its tributaries usually on gravel terraces. These ditches are believed to be round barrows dating to the late Neolithic early Bronze Age. Some of the most notable sites are located to the east of Olney towards Clifton Reynes, to the north east at Ashfurlong , and to the south west in Weston Underwood.

There is also substantial evidence for Iron Age occupation around the town. A number of sites have been revealed in ad hoc excavations such as that at Emberton, while others have been discovered during the investigation of Romano-British sites, most notably at Ashfurlong. There seems to be some sort of late Iron Age continuity on the sites at Ashfurlong and Emberton, which evolve and develop in the Romano-British period. Also at Clifton Reynes where a number of post built round houses were discovered.