Please note that this web page is under development.

Olney manor was in the possession of the Earls of Warwick until the death of Anne, Countess of Warwick in 1492. The manor was then transferred to the Crown and remained in royal hands until 1629 when it formed part of the grant made by Charles I to the citizens of London. In 1639 the manor was purchased by a London merchant, Richard Nicoll whose descendants held on to the manor until 1755 when passed through the female line to the Earls of Dartmouth.

By 1604 the manor was held by Sir George Throckmorton, remaining with his family until 1767 when it was sold to Lord Dartmouth. In 1798 it was sold to William Farrer of Cold Brayfield. 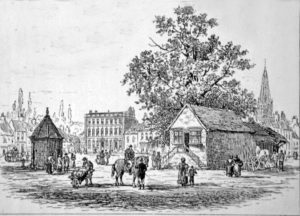 The Sheil Hall on the right

There are a number of references to the Shiel Hall which was positioned in the centre of the market place. It is believed that the building acted as both a market house and as a town hall. The building is depicted in an early 19th century painting but was destroyed around 1816.

There is also an obscure 18th century reference to a shambles near the market place. The word ‘shambles’ originally meant ‘meat market’, having evolved from the word schamil meaning ‘table or stall for vending’. Maybe this 18th century reference simply referred to the weekly ‘prescriptive market’ mentioned in the previous page (Medieval Period). 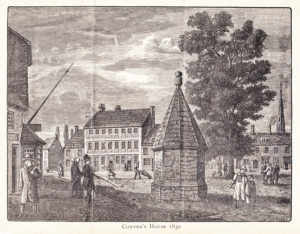 In addition to the Shiel Hall, the market place had a ‘lock-up’ to accommodate the drunk and disorderly and people who had committed minor crimes. The ‘lock-up’ is also depicted in two paintings, including one of 1821 which shows the building to be hexagonal in shape and built of brick and clay tile. It is not known when the ‘lock-up’ was demolished but it is thought to have coincided with the creation of the county police force in 1856.

The town suffered much poverty when the trade began to decline and in 1780 William Cowper, recorded that there were ‘nearly 1200 lace makers in this beggarly town’. Cowper was friends with John Newton who was the town’s Curate in 1767 and was engaged on a mission to help ‘poor ignorant lace makers’. The lace making industry began to wane in by the 19th century, superseded by the machine production of lace in Nottingham.

More details on Olney’s lace industry are available in other articles on this website.

The earliest known documented reference to a tannery in Olney is in a will of 1729 which names Annie Roberson as the successor of a tannery. However, it is conceivable that a tannery had been in existence on or near the site adjacent to the river Ouse for some considerable time.

William Cowper also records a tannery in Olney in 1780 when one of his pet hares had to be rescued from a tanning pit. 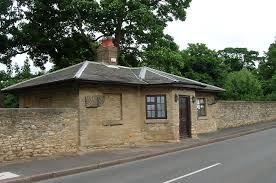 Olney was on the Kettering to Newport Pagnell Turnpike which was established in 1747. 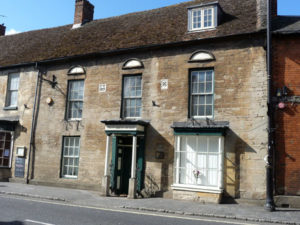 In 1754 there were reputed to be twenty-seven inns in the town and four known maltings. Many of these inns catered for the coaching trade as well as for the locals. One of the earliest is the Cross Keys Inn in High Street South, named as early as 1556.

Olney’s plan form in the post-medieval period remains, to some degree, unchanged from the medieval period. The only exceptions are piecemeal expansion of housing at the southern end of East Street and possibly west of West Street. The only other notable addition is the tannery, although there is no exact date for its foundation it is thought to have been established sometime in the 18th century.

In 1767 an Act of Parliament was enacted for dividing and enclosing the open and common fields and ‘commonable land’ within the parish of Olney. 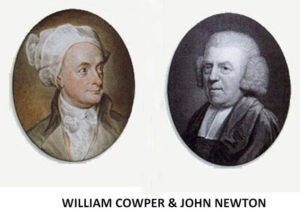 One of Olney’s most famous residents was the Rev. John Newton who was Curate at St Peter’s and Paul’s Church from 1764 to 1779. Newton collaborated with the poet William Cowper to write the Olney Hymns including Amazing Grace. Despite his fame in Olney, Newton ended his days as the rector of St Mary’s Woolnoth, London where he died in 1807. The remains of Newton and his wife were removed and interred in Olney churchyard where a marble tomb was erected. Newton was also famous for his sermons and the original pulpit used by him was restored to the church in 1922. Further details are available at the Cowper & Newton Museum. 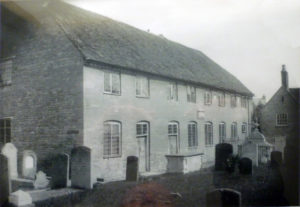 Image of an earlier Baptist Chapel

Nonconformist Christianity has always been strong in Olney. The town was evangelised by John Sutcliffe, one of the founders of the Baptist Missionary Society, who in 1799 established a seminary for the training of missionaries in what is now No. 23 High Street.

The Baptist Chapel sited just off the Market place was in built 1694 and enlarged in 1763. The Cowper Memorial Congregational Chapel on the east side of the High Street was originally built in 1700 and rebuilt on same site in 1879.

A school was kept by Samuel Teedon in the Shiel Hall in the Market Place.

Many more details on Olney’s early schools are available in other articles on this website.

Olney’s workhouse was located in High Street South in an area now known as Tory Row (or Victoria Row). It was established in 1735 under the governance of Mr John Tooley. The workhouse was demolished after the introduction of Union workhouses, thereafter Olney’s poor relief was handled by the workhouse at Newport Pagnell.

Ownership of the park passed to the Crown in Elizabeth’s reign, a survey of the park in 1608 by the Duchy of Lancaster records that the park was paled. The usual park boundary up to the late 18th century was the park pale (a fence of cleft oak pales). In 1608 the park contained 3854 trees, the 45 acres to the north of the lodge was known as the ‘Great Grove’. According to the Parliamentary Survey of Bucks made under the Commonwealth there was still a lodge but deer had gone and only rabbits, valued at £10, remained. The modern civil parish of Olney Park is 206 acres in area. 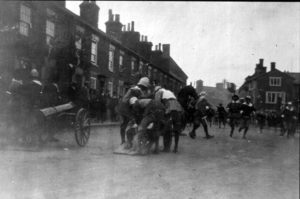 1931 Pageant – Re-enactment of the ‘Battle of Olney Bridge’

Olney was known to be an outpost for the Parliamentary forces during the civil war, with a garrison stationed within the town. There is no known documentation or archaeological evidence to suggest that the town was fortified. Olney’s association with conflict is derived from the accounts of an attack made by Prince Rupert’s Royalist forces from Northampton in 1643. A night raid was designed to drive out the garrison but the assault was successfully repulsed after a stand by the Parliamentarians on Olney Bridge. The engagement known as the ‘Battle of Olney Bridge’ reputedly left forty dead with many wounded. A number of military artefacts believed to be associated with this skirmish have been found in or near to the bridge. The finds include a number of musket balls, and a civil war sword retrieved by workmen excavating the foundations of the new iron railed bridge in the 19th century. A row of graves was unearthed in excavations at Emberton Park, these have been tentatively interpreted as casualties of the Olney Bridge skirmish.

At the junction of the Warrington and Lavendon roads outside the town, there is an open area upon which stood (supposedly) the gallows of the ancient Lords of the manor. 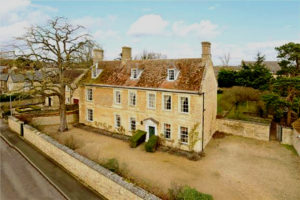 The Olney street scene is dominated by principally 18th and 19th buildings which vary in style from very fine Georgian mansions typified by the Old Vicarage in Church Street to the characteristic local limestone buildings along the High Street and in the Market Place.

Some of the finest buildings of this period include: Cross Keys House (No. 11 High Street South) – see image above – which was a former inn of 1717 although the structure is believed to be much earlier in date, Olney House (No. 15 High Street), and Orchard House (No.67 High Street). 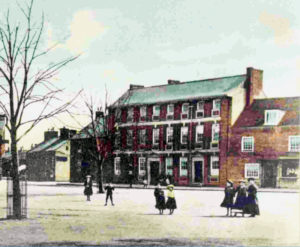 Perhaps one of the most well known buildings in Olney is the Georgian mansion known as Orchard Side located on the southern side of the Market Place. Although not regarded as the finest example of Georgian architecture, the building’s fame is derived from its association with the poet William Cowper who was resident in the building’s western wing from 1767 to 1786. At the rear of the property in the herbal garden is the Summer House, a small retreat in where Cowper wrote much of his poetry. Cowper’s former home is now the Cowper & Newton Museum which is dedicated to telling the history of the town and the life of Olney’s celebrated residents, William Cowper and John Newton. The museum has also retained the custodianship of the gardens and the Summer House.