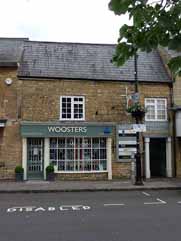 No 20 Market Place, 2012
Click on image to enter ODHS Buildings Database for this property

Number 20 Market Place may well have belonged to the Smith family, but was occasionally occupied by tenants. William Smith was there in 1801 and 1810/11 but John Litchfield was there in 1833 and Millicent Litchfield ran a ‘Pot Shop’ in 1841 and Hannah Litchfield advertises her eating house in 1844.

A sketch of the property made in 1862, shows a ‘Smith, Builder’ signboard, and Eli Smith & Son were still there 25 years later. Ratcliff recorded in his 1907 Almanac that ‘Fred Smith’s workshops (now J Garner’s) burnt, 1882.’

In 1888 Charles Dimmock & Co ran a Cycle Store from Number 20, whilst the 1891 Census lists Joseph Luck, a shoemaker, and his wife Elizabeth as residing at the house.

The property was bought by J J Garner in 1901. In that year it was let to the Olney Co-operative Society as a grocery and coal shop. The 1910 Inland Revenue Survey records J Garner as the owner and Geo. Stanley as the tenant, whereas the 1911 Census lists Mary Mynard as residing at the house. 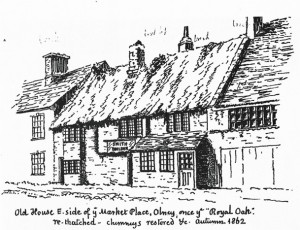 It is recorded by J J Garner that Mr Bennett, a draper occupied the premises in 1914, and in 1924 the Marshall Brothers began their hairdressing business there. They were followed by Mr Dix in 1933 who started a wireless business, and then in 1934 by Wilfred Vincent Turner who started his hardware business from Number 20. The property appeared to be used as a springboard to greater things as all of these businesses (with the possible exception of Mr Bennett) starting up in Number 20, under the ownership of Mr Garner, and later removed to larger premises in the town.

In 1910 the house was let to Emily Minard and Winifred Perkins and in 1936 are still recorded as living there. 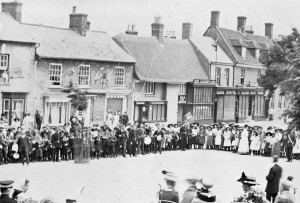 In 1938 the house was let to the Odell family. The 1951 Register of Electors lists Herbert George, Hilda Ellen and Gilbert George Odell living at No 20 Market Place.

The current occupiers ‘Wooster’ (fashions) has traded from No 20 since about 1992 and followed ‘Olney Antiques’ who operated there from around 1990. 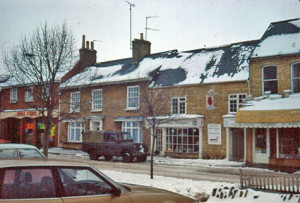