OTHER OUTLETS AND STORES

Sowman’s had a travelling shop that went out to the villages on a regular rota system. Bob Robinson drove this mobile shop which covered a wide area driving out as far as Kimbolton. He was assisted by Don Hooton, who had lost an arm in the RAF. The shop sold anything and everything, but especially paraffin, which of course was in great demand for heating. Most households had stand-alone paraffin heaters, such as the Fyreside and Valor, and many people who needed paraffin did not have the means to collect it themselves. Each village had its own specific day when the van paid its regular visit. A similar rota applied to Sowman’s reps. 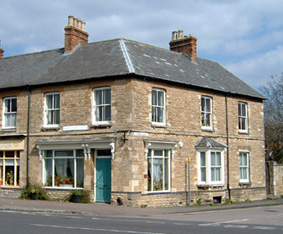 The travelling shop also delivered goods within the town, if someone bought something at the shop and could not carry it home, it could go on the ‘van’.

In High Street South, Sowman’s owned a property (now Aubergine’s) used only as a showroom for bicycles and stocked mainly those made by Raleigh.

On the corner of Holes Lane and Dartmouth Road was another Sowman’s shop staffed by Nellie Lett and later, Doris West. This shop sold all types of household cleaning materials including Oxydol, Zebra, Fairy and Lifebuoy soap. The familiar smell of these products was immediately noticeable on opening the shop door, after recovering from the shock of the very loud ring of the door bell! The shop could be described as a smaller version of the ironmongery shop in the Market Place. The outbuildings and yard belonging to this shop stored agricultural equipment. (A pottery business is sited there now.)

Sowman’s also stored equipment in the old maltings near the former Cock hotel, now Taylor’s estate agents. Later, Mr Lord had garages built there and one of Jean’s many tasks was to collect the weekly rental of ten shillings for each garage.

Sowman’s also ran a well stocked ironmongery shop in Newport Pagnell High Street, formerly belonging to W J Rand. It was managed by Albert Childs and was situated next to ‘The Cannon’ public house. This shop was considerably smaller than the one in Olney, but had its own van to deliver items in the Newport Pagnell area. Bulky, or more unusual items, were usually brought from the Olney shop.

Sowman’s always exhibited at both the Bedford and Bucks Annual Shows. The Bedford Show was held at Cardington Road, and in Jean’s time had been in existence for about 100 years. The Bucks show was held at Hartwell Park. Exhibiting at these agricultural shows was a major undertaking and involved a huge amount of work; for example, all the machinery on display had to be cleaned and polished thoroughly. Mrs Looms was engaged to cater for Sowman’s at the Bedford Show, but the office girls, especially Jean and Pam Sharp, covered catering for the Bucks Show. These shows were a major social gathering for the local farmers and Jean added that going to the shows was quite a perk for Sowman’s girls.

Photographs taken in 1933 of a firm’s dinner shown in the ‘companion article’ indicate that staff did have the occasional treat, but in Jean’s time at Sowman’s, works outings had long since stopped. However, if a sales target for Castrol oil was met, a pub having an account with Sowman’s would be chosen for a ‘jolly-up’ but such events were few and far between.