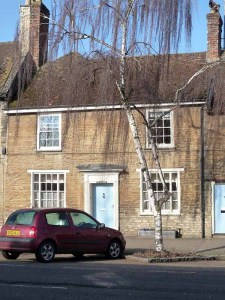 Thomas Haddon first appears in any records relating to Olney in the Posse Comitatus of 1798. This Posse Comitatus is a list of all men eligible for military service between the ages of 16 and 60. Thomas Haddon is listed as a Schoolmaster along with Edward Lambert, who is thought to have succeeded Samuel Teedon at the Shiel Hall on the Market Place. Link to 1798 Posse Comitatus for Olney

Thomas had heard of an advantageous opening for a private school at Olney, which he decided to seize, as he wished to have a home of his own so that he could marry the daughter of his old schoolmaster, Thomas Comfield. Thomas Haddon’s house was possibly No 51 High Street, now called the ‘Old Manse’.

His school there flourished and in a year’s time he was able to rent a part or the whole of a larger house, which had been the residence of the poet, William Cowper on the south side of the Market Place.

In 1800 at the age of 25 Thomas returned to the place of his birth to marry, by Licence, Elizabeth Comfield of Guilsborough, Northamptonshire. She was the daughter of the headmaster of his boyhood school, known as ‘The Writing School’, to distinguish it from the Guilsborough Free Grammar School. The newly married couple returned to Cowper’s House where a year later, according to descendants of the family, their first child, Thomas Comfield Haddon was born. This school also flourished and so did his family. A second son, Frederick, was born in 1803, to be followed by a third son, Richard in 1805. A daughter, Eliza followed two years later and the last son, William was born in 1810. 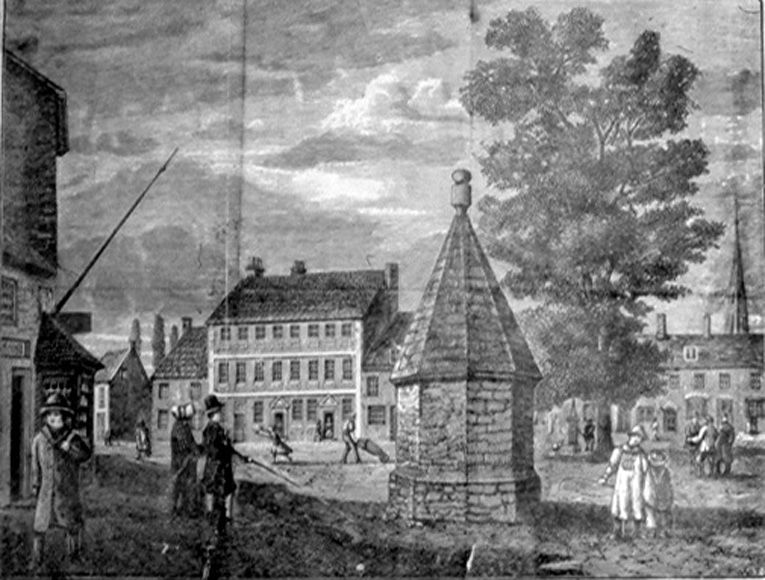 When Thomas began to speak of moving to a place where he could have a still larger school some of the principal inhabitants of Olney begged him not to do so, and asked what would induce him to remain, and he replied, “a small farm”. A farm was indeed found for him at Lavendon and for seven years he augmented his scholastic income by farming. He is listed as a ‘ farmer’ in the 1821 Census when was living again on the west side of the High Street, presumably at No 51, the old Baptist Manse, which had been rented as a school-house.

This would explain why two advertisements I found pasted inside a copy of a local history book on Olney – The Town of Cowper, First Edition 1886, by Thomas Wright – (but with the name of the newspaper cut out, quite likely the Northampton Mercury) were headed , ‘The Rev. J SIMMONS & T HADDON’. The Rev. James Simmons was Minister of the Baptist Chapel from 1818 to 1834, and quite likely taught at the school. In the advertisement dated Jan. 1 1822 the school is described as a ‘Classical and Commercial Seminary’ and gives details of the Terms:-

In the brief advertisement of the previous year the Rev. J Simmons and T Haddon ‘Respectfully’ informed ‘their Friends and the Public that their School re-opens on Monday the 23rd July’.

Thomas Haddon’s second son, Frederick, assisted him with the teaching at his school, but sadly met with a fatal accident while watching the pupils swimming in the River Ouse. One of the pupils, George Hollingshead, later recalled the incident thus:

‘Several of us went to bathe in the Ouse on June 12 1839. Mr Frederick Haddon stood on the bank, holding a watch in his hand to check the time that we were allowed to remain in the water. One of my fellow-pupils, named Morgan, got out of his depth, and being unable to swim, was in great danger. Mr Frederick Haddon thereupon walked into the river in his clothes, still holding the watch in his hand above his head. When he got into fairly deep water, he suddenly disappeared, and I saw him no more – only his hat floating on the surface. At that point there is a shelf in the river below which the water is very deep, and Mr Frederick must have unknowingly stepped off it into the deep water. Probably his feet stuck fast in the mud at the bottom, for he never rose again. The boys, of course, raised an alarm, but when help came it was too late to save our beloved master. The lad Morgan was rescued by some of the boys who could swim. It was by far the most calamitous occurrence of my boyhood. It so much upset me that I did not sleep one minute for three or four nights afterwards. I still remember it as distinctly as if it had happened yesterday.’

A short account of the above tragedy can be found in The Northampton Mercury of Saturday, June 15th 1839. Mr Frederick Haddon was buried in the graveyard of the Baptist Chapel, which his father, Thomas, attended, though he never became a full member of the church. 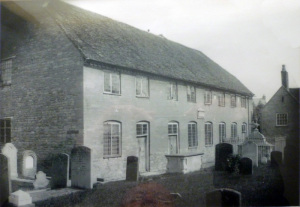 Photograph of the Baptist Chapel before the restoration of 1874

Thomas Haddon never recovered from the loss of his son, he gave up the school shortly afterwards, which had successfully existed for over 40 years. Thomas spent his last years in retirement at Olney, where he died on 25th April 1845, aged 70. He was buried in the same grave as his son, and fifteen years later his widow was also laid to rest there.

Mr Hollingshead (who became a renowned clock and watch maker located at Nos 10 & 11 Market Place) described Thomas Haddon as “a fine looking man, rather thick set”, and of Mrs Haddon, he recalled her as “rather a little woman and active in her habits”.

The Rev. Henry Gauntlett and the Rev. Daniel Baxter Langley

It would appear that many of the clergy in Olney supplemented their stipends by taking in young gentlemen boarders. It is known that the Rev. Henry Gauntlett did so at the Vicarage from around 1813, and he was followed by the Rev. Daniel Baxter Langley (1844) right up to 1858. At present I have yet to find any detailed information regarding the Rev. Langley’s School.

The following paragraph is taken from the notes of Walter Pennington Storer (see next installment) and is an extract from a  Memoir of the Rev. Henry Gauntlett (of the Olney Parish Church) written in 1835 by his daughter, Catherine, after the death of her father.

In 1825 he first received the assistance of a curate,  “The late Rev. A.D. Ions who was for a few months Curate of Olney having been nominated to it as his title for orders.  He was accepted as a candidate by ye late Bp. of Lincoln upon my father’s special recommendation contrary to ye general practice of that Prelate of receiving none but graduates, for owing to circumstances he had kept only a few terms at Cambridge.  In addition to his classical and mathematical attainments as a linguist Mr. I. had few equals.  He was critically acquainted with Hebrew, Syriac & Arabic, possessed some knowledge of Coptic & was familiar with several of ye continental languages.  He was educated a dissenter, but after studying ye points of difference between ye Church of England & various sectarian denominations he became a decided & consistent Churchman.  And in argument on this subject few could cope with him, for he would not only answer ye objections started by his antagonist but would bring forward new ones to his assistance, & then refute them with great ease , & evident delight.  He never lost an opportunity of testifying his grateful attachment to my father & among others he gave him ye most pleasing & satisfactory proof of his friendship by his unremitting exertions to communicate his various knowledge to ye sons of his Vicar. 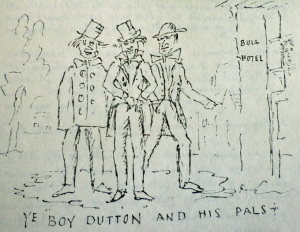 After he ceased to be curate of Olney, as he  continued for some time in ye neighbourhood in ye capacity of a private tutor.”  [He was Tutor in a School kept by Mr Morris ye minister of ye Independent Chapel at Olney] “he constantly attended ye church & frequently assisted in ye Services.  After graduating in Divinity at Cambridge he in 1828 became Curate of West Malling in Kent where after a short illness he terminated his brief career on ye 15th Aug. of ye same year.”

In the scurrilous ‘Ye Olney News’ (more of that in a later instalment) and towards the end of the Rev. Langley’s time at the vicarage,  it was reported on Wednesday, October 20th 1858: “we are informed that three young gentlemen pupils of ye vicar of Olney are often seen together at The Bull”.

Another nonconformist in the town also ran an academy which opened on 20th July 1819. It was called a Commercial and Classical School and ‘proposes receiving to board and educate 20 young gentlemen’. This school was previously conducted by a Mr. William Clarke in the years 1817 and 1818, according to the newspaper advertisements of those dates. 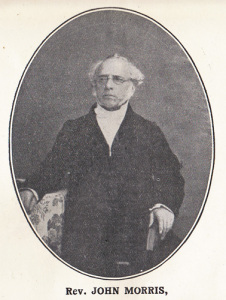 ‘The plan adopted, it is presumed, will include every practicable subject requisite to form a liberal and useful education. To promote the religious principles and moral habits of the Pupils will in this seminary be an object of the first consideration, and the strictest attention will also be paid to their health and domestic comfort. The house is modern and spacious, to which are attached an extensive yard, garden and play-ground.
A staqe (coach) to and from town daily passes the door.
References can be made to ministers and merchants of the first respectability in London.’

A year later in an advertisement about the re-opening of the school, it is stated that ‘Each pupil occupies a separate bed’!

In the same earlier mentioned book by Thomas Wright, there was also pasted another advertisement dated 12th January 1821 which stated:

OLNEY HOUSE. The Rev. J. MORRIS respectfully informs his Friends and the Public that his ACADEMY will be RE-OPENED on Monday 22nd instant, and he trusts the Means of Improvement and the Comforts which his limited Number of Pupils enjoy, are such as peculiarly to recommend his Establishment to the Attention of those Parents and Guardians who may favour him with their Confidence. Satisfactory References can be given to the Friends of the young Gentlemen under his Care.

A similar advertisement for the following year stated that the number of pupils was limited to 24. 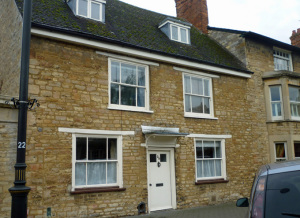 The Rev. John Morris lived at what is now 28 High Street, and the property was called ‘Olney House School’. The Rev. Morris was Minister from 1816 to 1840 of the Independent Chapel, as it was then, later becoming the Congregational Church. It is now the United Reformed Church.

The next two installments concentrate on the schoolmasters of the second half of the nineteenth century, particularly Walter Pennington Storer and Thomas Wright.