What did the chest contain?

Were you disappointed to discover that the chest contained only rolled-up papers?

Many churches have such a chest, but few now keep documents of any value in it, and the term ‘Parish Chest’ has come to mean the Parish Archives, regardless of where they are stored.

Broughton’s documents are all elsewhere as the building is no longer a parish church but is in the care of the Churches Conservation Trust, and most of those belonging to Milton Keynes Village are either in the Centre for Buckinghamshire Studies or they are registers currently in use. 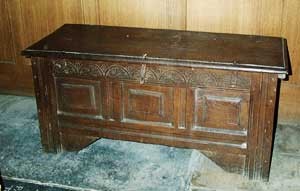 The chests themselves would once have held church plate and vestments and a few precious books, though some were used as almsboxes or contained the property of a gild. Originally simply hollowed-out tree trunks, later iron-bound and chained for security, they developed into more elaborate pieces of furniture, adorned with carving and decorative ironwork. They commonly had three locks like the one in our picture with the three keys held separately by the priest and the two churchwardens so that all three had to be present for the chest to be opened.

The parish assumed more and more civil responsibility as time went on and the Vestry, or Parish Meeting, was, as the Parish Council has been since the Local Government Act of 1894, the first tier of local government. (The Parish Council and the Parochial Church Council are not the same thing, whatever the impression given by The Vicar of Dibley! Officially however, churchwardens are still elected at a Vestry Meeting and have duties to the community and not just the church).
The vestry could levy rates for such things as the maintenance of the highways, poor relief, and the care of maimed soldiers and vagrants. It also appointed the Parish Constable and other officers. Vast quantities of papers resulted, all requiring secure storage. Parish churches had been keeping registers of baptisms, marriages and burials, sometimes in a haphazard fashion, since 1538, but Hardwicke’s Marriage Act of 1753 required marriages to be performed in churches after due public notice (the calling of Banns) and this necessitated bound registers in standard form. Rose’s Act of 1812 standardised entries in registers and gave rise to a further crop of iron boxes in which to store them.

So what might be the typical contents of a Parish Chest?

Treasure Trove for the local historian, if for no-one else!

And what did we find in ours?

The box and case also contained all kinds of unrelated oddments which were plundered for our community play, and for many talks and small exhibitions since.

For more information on Parish Chests and their contents, see “The Parish Chest” by W.E. Tate, published in 1946 by Cambridge University Press, ISBN No: 0 85033 507 8, which has been most helpful in compiling this page.