All Saints Tour – 11 Niche in the North Chapel 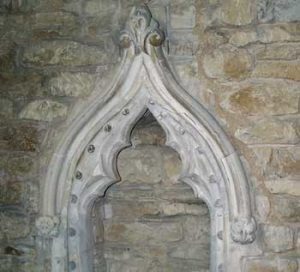 The niche in east end of the south wall of the chapel is a good indication that the chapel would originally have had an altar. This, in any case, is likely if it was constructed as a chantry chapel where masses could be said for the soul of the lord of the manor Phillip de Aylesbury. The hood of the niche is richly ornamented with ball flower ornament around the ogee shaped arch. The label stops at the ends of the moulding and at the peak are of finely carved foliage. It is, perhaps, surprising that the carving has survived so well, since the chapel was used as the village schoolroom from Elizabethan times until the National school was opened in 1860!