Next to the sedilia is a brass mounted on the wall. It commemorates Adam Babyngton who was Rector in the fifteenth century. He died in 1427 and was buried in the middle of the chancel. The brass was removed from the floor when the chancel was restored in Victorian times. The inscription under his feet is:- 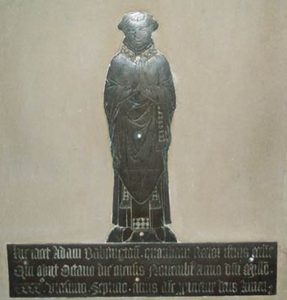 Here lies Adam Babyngton sometime Rector of this church
Who died on the eighth of November in the year of our Lord
Fourteen hundred and twenty seven. Amen