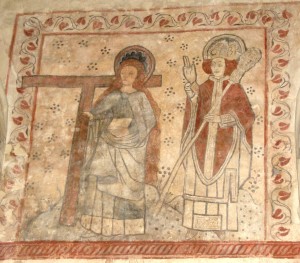 This painting shows St. Helena, mother of the Emperor Constantine, who reputedly discovered the true cross. She is shown holding a cross shaped like a T, or tau in the Greek and Hebrew alphabets, and thus known as the Tau Cross, or sometimes as St.Anthony’s Cross. The bishop beside her may be St.Eloi (or Eligius), patron saint of blacksmiths and farriers. Certainly the tools of his trade are shown in picture 4 which is sited immediately below this one. He is reputed to have removed the leg of a particularly frisky horse to avoid being kicked while shoeing it, and to have replaced it successfully afterwards! He was a skilled metal worker, and reliquaries attributed to him still exist. He was bishop of Tournai in 641.