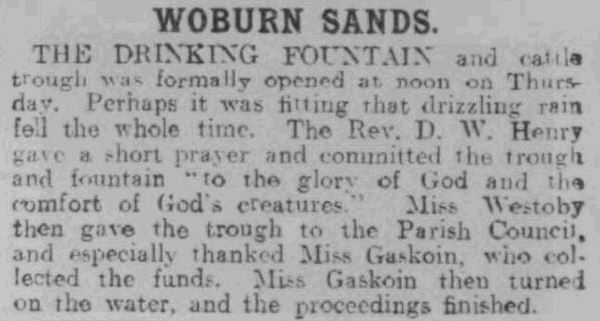 “WOBURN SANDS – THE DRINKING FOUNTAIN and cattle trough was formally opened at noon on Thursday. Perhaps it was fitting that drizzling rain fell the whole time. The Rev. D. W. Henry gave a short prayer and committed the trough and fountain “to the glory of God and the comfort of God’s creatures.” Miss Westoby then gave the trough to the Parish Council and especially thanked Miss Gaskoin, who collected the funds. Miss Gaskoin then turned on the water, and the proceedings finished.”

With that small announcement, in the Bedfordshire Mercury, on the 1st March 1912, Woburn Sands joined a national scheme in supplying a granite water fountain and trough for thirsty humans and animals to drink from. It was erected under the existing lamp post in the middle of the Square.

Where the water was taken from, I do not know!

Woburn Sands Council had discussed whether or not they could accept it in 1911, and decided that as the Association and the RSPCA were willing to pay for it, they would! The Clerk reminded the Council taht it had no powers to do so, but he was over-ruled, and the offer of the trough was accepted. The question of the site of the trough took up considerable Council time, and a man was paid 12/- a year to keep it clean. Miss Gaskoin, who lived at Greenwood Cottage in Hardwick Road, ran the local branch of the RSPCA. She had raised £34.9s.1d locally, to which the Association added another £20.10s.0d.

Woburn Sands wasn’t the first to get a trough locally. Aspley Guise had had one installed the year before. On 25th July 1911, a trough was erected in their Square by local the RSPCA in memory of Miss Courtney. It cost £52.14s.0d and the inscription another £3.9s.4d. The Association paid £6.3s.4d towards the cost. The Aspley Guise trough was removed in about 1950 or 1951 when a bus shelter was built. No one seems to know exactly what happened to it, but I have heard rumours it may have been shipped to Wickstead Park in Northamptonshire.

Drinking wasn’t the only use that the Woburn Sands trough had. Luton Times and Advertiser July 5th, 1912:

“WOBURN SANDS. A USEFUL TROUGH. The public water trough comes in for a variety of purposes, says a local correspondent. At early hour on Sunday morning, two motorists had a regular bath in it, and later the same day, a cyclist had his upturned bike against it dipping the tyre in the trough to find the puncture.”

The trough remained in place for seven years, but when the War Memorial was erected in the Square in 1919, the trough was moved firstly to the side of the High Street, where it stayed for a short time before being shifted again to the side of Woburn Road, opposite The Fir Tree Hotel. When it moved the second time, it crossed the county border from Buckinghamshire into Bedfordshire, and Aspley Heath Council took over the responsibility of maintaining it. With the increase in mechanical transport from this point, it would not have survived long in the middle of the busy junction. 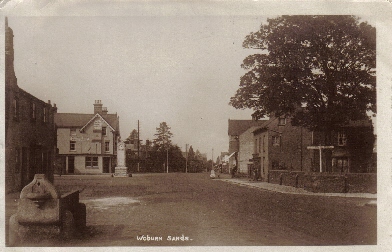 Even though maintenence had passed to Aspley Heath Council in 1919, it was Woburn Sands Council that wrote to the Joint Water Committee in 1933, to complain about lorry drivers using the trough water to fill their radiators.

It can be seen below, in September 1948, in a very sad state. The building behind is Richardsons sweetshop, later demolished to extend Aspley Heath School. The War Memorial, still in the background where the trough used to stand in the Square, was moved itself in 1974 to it’s present site in Woburn Sands High Street.

The MDFCTA historian found that in October 1948, Miss M.B.Gaskoin, (now of 5 Sloane Court, London, S.W.3) seemed to be involved attempting to the move the cattle trough to the new recreation ground. However, this never occured. Later that year, at the November 1948 Woburn Sands Council meeting, attention was drawn to it’s dilapidated condition, but it was pointed out that as it now stood in Aspley Heath Parish, it was therefore under the care of that Council. A letter had been received from the RSPCA authorising it’s disposal to a farmer, provided it was used for animals; and the Council offered the trough to the tenant of Edgwick Farm. This idea too was not accepted, and the MDFCTA historian found a reference to it being removed to a highway depot in Summer 1949. This ties up with a report in the Woburn Reporter of 23rd August 1949:

“Woburn Sands’ famous (or notorious!) drinking trough which has been in a damaged condition for a long time, has at last been removed. The work was carried out recently by roadmen of Ampthill Rural District Council.  Fortunately – for the roadmen at least – it did not have to be taken too far.  It was taken to a temporary “home” in the garden of a house on the opposite side of Woburn Road on which it stood. Because of the weight, it was no easy matter to move the trough even that short distance, but the journey was accomplished with aid of a horse and rollers. Upon inquiry about the ultimate fate of the trough we were informed it was likely to be erected in another part of the village. If so, it will be hoped that it will be in a repaired condition and kept in a state of cleanliness. At one time the trough stood in Woburn Sands Square but was moved to the side of High Street when the War Memorial was erected. Eventually it was moved to the site in Woburn Road where it was badly damaged. In the early days it was a great asset but its usefulness deteriorated with the increasing use of mechanically propelled vehicles. In recent years however, drivers of lorries have been known to take water from the trough for their vehicles, although by using oily cans they have made the water unfit for horses or other animals. Some time ago it was announced that the trough would be given to any person who had any use for it. Nobody accepted the offer, doubtless because of the difficulty of removal.”

In November 1949, the MDFCTA received a letter from a Mrs. Lane from the firm Blackie, a wholesale manufacturing chemists, of Pomeroy Street, London, S.E.14 requesting a trough for a manufacturing process, saying it needed to be capable of withstanding dilute acid. Scribbled on the letter there was a hand-written note of: “9/11/1949 Phoned Mrs. Lane and offered Woburn Sands trough for £20 to collect”. There is no evidence that the trough was actually moved and used by Blackie, but if it was purchased at that time, that company moved to Field Road Industrial Estate, Mildenhall, Suffolk in 1969, and in July 1975, Robert Blackie (Pharmaceuticals) Limited filed for bankruptcy, so there is no one to check with now.

Do please have a look at that overgrown old stone planter at the bottom of your garden, it just might be something interesting!

Further details of other troughs and a history of the Association can be found at http://mdfcta.co.uk/index.html  and I am very grateful to them for sharing their archives with me.