Some documents have come to light, all relating to the Hammond family. These came via several different sellers at auction, all of whom had bought bundles of documents in the Isle of Wight. There are several relating to the Bedford Arms Hotel at Woburn, and also The Swan Hotel at Woburn Sands, amongst which was a little programme for a smoking concert to celebrate the achievement of Thomas Edgar Hammond and his incredible 131 mile walk in just 24 hours. Other documents proved that his father was running The Swan at Woburn Sands at that time, (he had taken the Hotel in 1906) and that this was not Tommy’s first walking record. In 1907, Hammond walked the 54¼ miles from London to Oxford in 8 hours 51 minutes, beating the record by over an hour. However, the record for which he is remembered was the Middlesex Walking Club 24 Hours Track Walk at White City Stadium, London, on 11th to 12th September, 1908.

“The world’s record for a 24 -hour walk is now 131 miles 580 yards. These figures were set up by our member, T. E. Hammond, in the competition promoted by the Middlesex Walking Club, and held at the Stadium on September 11th and 12th, 1908. The record has but one rival, and that not fully authenticated, an indoor walk by Joe Scott years ago, in Australia. 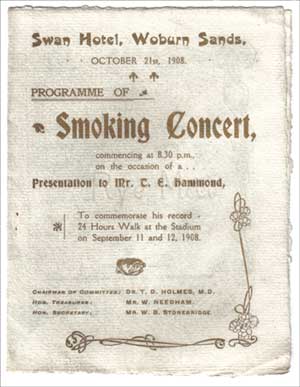 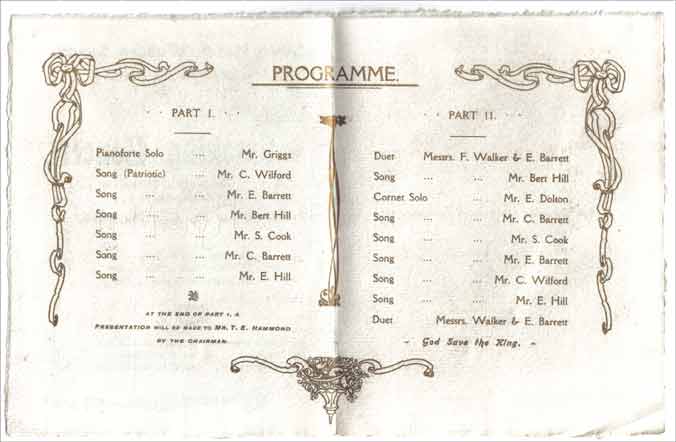 It easily surpasses all other performances, amateur or professional. It is likely to remain the best on record for a long time to come, unless Hammond himself cares to have another cut at his own figures. If he does, and all goes well, he may reach 135 miles. This is no mere boastful conjecture. I speak from intimate first-hand acquaintance with all his past successes.

Our member, Jack Butler, was not in form. An occasional breakdown is no great matter to a champion whose career has been as brilliant as his.

Our member, Bill Brown, led at the start; then Jack Butler took the lead till the 11th mile, at 20 and 25, Ross, the Road Walking Association Champion, was in front, Hammond at first, was in close touch with the leaders, but at 15, 20 and 25 miles Ross was well in front of him, at one time nearly ten minutes ahead. Nevertheless, the ultimate winner was in front at 30 miles (5hrs, 1m. 40s) and there he stayed till the end. Those who knew best the record-breakers capabilities had predicted a remarkable performance and were not disappointed, as, although Hammond had more than one bad time, his superb courage and dogged determination enabled him to absolutely smash the then existing records. 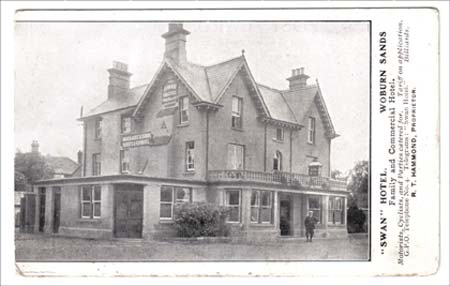 The thanks of all distance walkers are due to the Middlesex Walking Club for their promotion of this interesting event. Among the officials the hardest work fell on the timekeepers and lap-scorers. In an event of this length the judges did not have much responsibility. Their hours were long, but their work was easy: a sharp contrast to what a walking judge has to do in those quarter hour double shuffles which pass for walking races! And yet the duty was not altogether a sinecure. Warnings were given, both early and late, in the race.

The great event was in many ways very different from its predecessors. When Billy Howes made his 24 and 26 hour records he walked on an eight-lap Indoor tan track, girders and glass above him – no blue sky, or starlight or sunrise, The daylight came dimly through dusty panes, and gas jets were flaring all night. The crowds were there, as at the Stadium, but it was under cover and between brick walls and they had brought their pipes with them. When Sinclair made his record at Lillie Bridge he had the open air but no competition on the track, and no companionship except that of his pace-makers, who were all too few, and quite out of condition. The crowd (I cannot remember clearly) may have been a big one at the finish – a big one for the Lillie Bridge of those days – but in any case I am certain it did not amount to one-twentieth of the throng that watched the last hours of the walk at the Stadium.

Well, long life to distance walking! And long life to the Surrey Walking Club! We don’t shine as sprinters just for the present and you have to go a tidy way down the list of record and championship figures before we begin to push our way to the front. But there are two points on which we can flatter ourselves. Our boys always perform brilliantly in distance walks, and often win; and our boys walk fair and square in shorter walks – and don’t make a fuss when they lose. The critics of a generation ago in speaking of bad sportsmen would say of them that they were determined to “win, tie or wrangle.” There are “sportsmen” in our day who are determined to win or tie, and wrangle too!”

[Many thanks to Ulrich Kamm, of Colorado, for supplying the above article]

A more complete history of Tommy Hammond can be found at http://www.vrwc.org.au/tim-archive/wo-tommy-hammond.pdf