Albert was the son of William George and Emma, of Ivy Cottage, The Leys. He was baptised, along with a brother, on 18th April 1900, but no birth date is given in the register. Albert volunteered in August 1914, which is when the 1st Bedfordshire went to the front. He joined them in February 1915. He took part in the retreat from Mons and the Battle of Marne.

An attack was launched to recapture Hill 60 at Ypres on 18th April. The 1st Bedfords. joined in soon after midnight on the 19th, with the East Surreys in support. The day of the 19th was fairly quiet, but a full scale bombardment started at 5pm for about an hour or so, although there was no attack. He fell during one of the bombing duels for the flattened mound of earth that had been blown up by British mines 2 days earlier. The 1st Bedfordshires suffered about 400 killed or wounded during the action at Hill 60. He died aged 19.

He is listed on the Ypres (Menin Gate) Memorial Ieper, West Vlaanderen, Belgium. Listed on the Woburn Sands Memorial. His army service papers have not survived.

His brother, Joseph Farmer, of the Machine Gun Corps. also of Ivy Cottage, volunteered in 1915. He fought at Loos, Lens Arras, and Cambrai, before being taken prisoner. He returned home in August 1919. 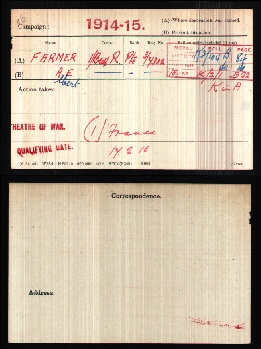