Benjamin served in Bermuda and South Africa before WW1, and landed in France for the first time 6th October, 1914 in the 7th Division. A local Driscoll had just returned from South Africa and was off to the Front, according to a report in the “Beds Times” on 2nd October, 1914, but it was the 1st Battalion who were in South Africa at the start of the war. Perhaps he transferred at some point.

Bens parents, John, a plasterer, and Lydia, had had 10 children in Woburn Sands. Ben was one of four brothers in the forces, and was the second to have been killed. (See also Percy Driscoll)

He fought in the First Battle of Ypres that saw the ‘Immortal Seventh’ Division lose 90% of their number whilst fighting the vaunted Prussian guards to a very bloody standstill. Benjamin’s Battalion were one of the British battalions who took part in the Chistmas Truce and played footy against the Germans in No Man’s Land. They were losing 3-2 when the game stopped after the ball burst on barbed wire!

He also saw action at Neuve Chapelle and Second Ypres, but was killed during the Battle of Loos. The Battalion Diary records: “1st Oct 1915 Stone Alley and Breslau Trench near Hulluch. At Dawn, Major J. C. Monteith who had taken command of Battalion after Lt.Col. C. E. Onslow was wounded, was killed while directing the work on the block.”

Benjamin fell during a series of desperate and prolonged counter attacks from both sides for control of trenches along the Hulluch Road. Almost 400 men were lost in his Battalion during the battle. The Battle of Loos was coming to an end at 1.00am on October 1st, with a counter bomb attack, but due to a lack of ammunition, it failed to make any headway. Bombing continued until midnight, when they were relieved.

The North Bucks Times, 16th November, 1915 reported:“Missing for a year. Mr and Mrs J Driscoll, 7 Leys Terrace, have recieved intimation from the War Office that their son Lance Corp Driscoll is dead. He has been wounded and missing since October 29th, 1914. This is their second son who has given his life for King and Country. Two other sons still serving in the Army.” but this is completely at odds with the history of Benjamin, and it was Percy who has given the death date of 6th November, 1914. Did someone have their wires crossed?

The other two sons were James, in the East Surrey Regiment, and Thomas, of the Royal Army Medical Corp. They both survived the war.

Bens picture was printed in the “Beds Times”, 19th November 1915. A message from the front read, “He was a brave little chap and no doubt was worth a VC for what he did.”

He is listed on the Loos Memorial, Pas de Calais, France. Listed on the Woburn Sands Memorial. His army service papers have not survived. 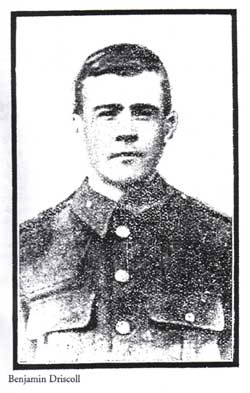