The Paxton family came from Potsgrove, where their father was a labourer, but he had once worked for HM Customs. Frederick had been a keeper in Aspley Wood. He was married to Annie Florence with at least two children, Alec and Frank.

Three tanks were due to help in the week long battle of Fleur-Courcelette, beginning on 15th September, but only one arrived. The 8th Beds began the advance at 6.20am, but were stopped by machine gun fire. They were attacking a trench called “The Quadrilateral”, but the supporting barrage was dropped too short, and fell on them. (See Robert Davis for details) Frederick is listed on the Thiepval Memorial, Somme, France. Listed on the Woburn Sands Memorial.

His army service papers have not survived, but his army will has. 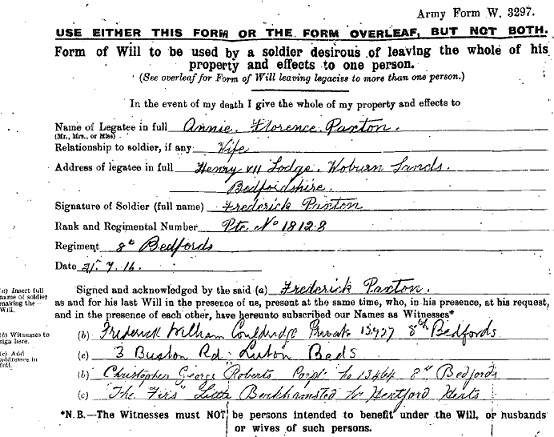