The shop fronts we now know as nos. 37 – 45 High Street were once another inn. Few people are aware that these premises were once licensed, and little is known of this inn, as records are scant. The property included the field at the rear down to Weathercock Lane, for many years known as “Odell’s Close”, and more recently the grounds of the Social Club. On either side of Odell’s Close were houses, one of the little groups that went to make up Hogsty End of Wavendon. There were also five cottages on the High Street, now fitted as shops. 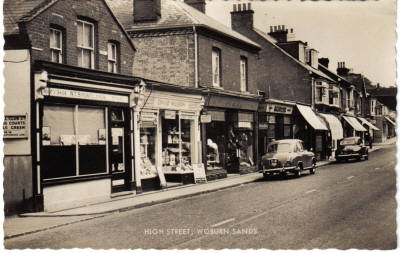 The earliest record is from the Bucks Register of Ale Houses, which only commences in 1753. How long before that date the property had been an inn is not known. Most of the rest of facts we have come from the late Arthur Parker’s research. The inn once stood behind the two nearest shopfronts in this postcard view of the High Street.

At the rear of the inn yard were a range of buildings, a loft there being the first home of the Social Club. The remaining parts of the outbuildings were probably converted to cottages after the inn lost its licence.

The Bucks Register of Ale Houses entries give the landlords as:

Nearly everything else we know about the inn comes from mentions in the newspapers of the time. At the very end of the 18th century is this advert from the Northampton Mercury of 23rd November, 1799.

The inn was also being used for the annual hiring event in the village, where labourers would meet with all the local employers to decide who worked on which farms for the coming year, an important event for all concerned. The Northampton Mercury again, 10th September, 1803:

“HOGSTYE-END STATUTE WILL be held the Red Lion, on Wednesday the September. Dinner on the Table at One o’Clock.”

As well as the Statute Fair, the inn was being used for local auctions. It must have had a decent-sized room that the buyers could sit in, and was central in the village. In July 1804, a large estate in Aspley Guise with residence was sold there by auctioneer Andrew Gardner. Sadly, there are no details of what building it was.

The nursery grounds mentioned in 1799 came up for sale in December 6th, 1806. The Northampton Mercury:

“To be SOLD by AUCTION by ANDREW GARDNER, On Monday the l5th of December, 1806 on the Premises of Mr. WILLIAM NICKOLS, of Hogsty-End, in the County Bucks, Nurseryman, who is declining Business, ABOUT 20,000 excellent SCOTCH FIR PLANTS, three Years’ Growth; 1000 Ditto, two Years’ Growth; 1000 DITTO SPRUCE FIR PLANTS, of six Years’ Growth; strong HOLLY PLANTS, of three Years’ Growth; and QUICKSETS, of four Years Growth. The Whole will be sold in convenient Lots. Likewise, at Three o’Clock the Afternoon of thesame Day, will be Sold, at the Red-Lion Public- House, at Hogsty-End aforesaid, A of FREEHOLD GROUND, used as a Nursery, situate at HOGSTY-END, on the road leading to Aspley, well fenced with a live Quick Hedge, containing about three Roods (be the same, more or less). The Sale of the Plants will begin exactly at Twelve o’Clock at Noon.”

Another large estate sale took place in May 1812, The first lot offered was 4 cottages in the occupation of William Goodall, Thomas Atterbury, William Garrett and Thomas Hayman. Lot 2 was two cottages with tenants John Hull and Samuel Benbow, and Lot 3, 3 houses with William Lovel, William Mapley and William Garrett. All these lots are described as “facing the turnpike road, near the new lodge.” This was the Henry VII Lodge, erected this year.

For many years, the Hogstye Statute Fair had been held at the Coach and Horses (now The Swan) but in 1813, it returned to The Red Lion. It is the Northampton Mercury of 3rd December 1814 where the next record about the inn itself can be found: 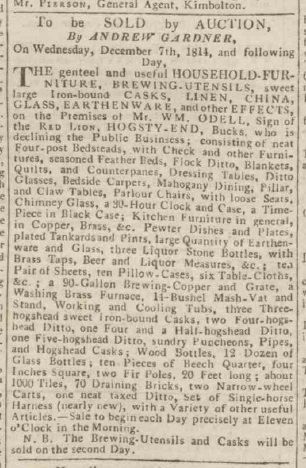 …so Odell was trying to sell up all his brewing goods in 1814. As noted, he continued as licencee for another three years, although there is another auction of brewing goods at the next year, stating the Inn was now the premises of Mr Russel. Is it possible that the Red Lion was being used just as the auction base to sell these goods from, and they weren’t actually the contents of the inn itself? Or were the Licencing Records not up to date?

Then there was another auction at the property. From the Northampton Mercury of 25th January 1817: 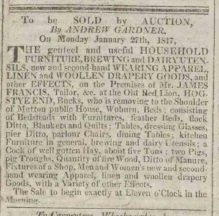 “To be sold at Auction by Andrew Gardner on Monday Jan 27th 1817, the genteel and useful household furniture, brewing and dairy utensils, new and second hand, wearing apparel, linen and woollen drapery goods, and other effects, on the premises of Mr James Francis, Tailor &c. at the Old Red Lion, Hogstye End, Bucks, who is removing to the Shoulder of Mutton public house Woburn, Beds: consisting of bedsteads with furnitures, feather beds, flock ditto, Blankets and Quilts; tables, dressing glasses, pier ditto, parlour chairs, dining tables, kitchen furniture in general, brewing and dairy utensils, a cock of well gotten hay, about 5 tons, two pigs, pig troughs, quantity of fire wood, ditto of manure, fixtures of a shop, men and women’s new and second hand wearing apparel, linen and woollen drapery goods, with a variety of other effects.  The sale to begin exactly at eleven o’clock in the morning.”

The emphasis is all on the tailors goods, rather than brewing goods, and the location is listed as “Old” Red Lion, so I think the premises had been turned into retail trade by now, which corresponds exactly with the last license listed as being 1817.

It is certainly listed as “formerly” in this advert from the Northampton Mercury of August 1838:

“TO BE LET And entered upon at Michaelmas next ALL that commodious HOUSE and PREMISES formerly known by the name of the Old Red Lion, situate at WOBURN SANDS, two miles from Woburn Bedfordshire on the North Road consisting of entrance hall and three other rooms on the first floor, four good bedroomslarge cellar, stabling for twenty horses, with other convenient out-buildings; an extensive garden, and pump of excellentwater, together with Four Acres of Grass land Seven Acres of Arable Land, situate near, can be had withthe above, if required. Coaches to all parts of the Kingdom pass the door every day. For particulars, apply Mr. George Odell WheelwrightWoburn, Beds. Woburn, August 2d. 1838.”

In the Tithe Apportionment of 1840 the property is shown as “House, Wheeler’s shop, barns, yard and garden, 54 poles, in the occupation of John Brandon”. His name does not appear in directories of that period, but in 1854 a William Brandon is listed as a wheelwright.

The property was still in the hands of the Odell family, and, after being held by George, a wheelwright of Woburn, it went to his son, Thomas. Documentary evidence is not available, but Parker thinks he sold in the late 1850’s when the paddock in rear went to Richard Key, and the block of buildings in High Street were probably bought by John Munday, as he is the next owner we can trace.

Early in 1969, the Bedfordshire Times purchased part of the block, and when the builders moved in to make alterations, Parker enquired if they had found anything of historical interest. His attention was drawn to a poster that had been found advertising an auction sale of the property on 21 August 1881.  It had been pasted on an outside wall facing the High Street, but shortly after, when the building was extended to form a shop-front, the wall was panelled over, and there the poster had remained for nearly ninety years. Unfortunately, age and damp had caused part of the poster to collapse, but though it now hung in strips, much of it was decipherable, and he made a copy of what he could see.

It was late in the day, and the next morning he telephoned the office of the newspaper, telling them of his discovery. They arranged to send a photographer in order to record it but, unfortunately, by the time he arrived, the bill had been torn down, much to Parkers chagrin and annoyance. Luckily, in 1977, a perfect copy of the poster came into the hands of the Record Office at Bedford:

LOT 1
3 capitally built brick and slated freehold Cottages each containing front parlour passage, kitchen, and 2 large bedrooms; brick and slated wood barns, front flower gardens large and partially walled kitchen gardens with three feet right of way at side, and a large brick and slated Workshop with large loft and granary over, standing in a large quantity of ground and most pleasantly situated within short distance of the railway station. Let to Messrs John Giles, Coxon and Moore and another, at rents amounting to £35 per annum.

LOT 2
2 substantially built brick and slated Houses one containing two rooms above and two below, with flower gardens large kitchen garden and 4Tt side entrance, brick and slated Wood barns, a large brick and slated Workshop with loft over and a piece of valuable building frontage, in the occupation of Messrs Godfrey and Newman at rents amounting to £22 per annum, (and in manuscript; subject to an agreement for lease to Mr Godfrey, 5 years unexpired at £8 per annum).

LOT 3
A Valuable Property comprising a brick and tiled House, formerly known as the Red Lion Inn, in the occupation of Mr Inwood at a yearly rent of £12 and containing 4 bedrooms and 5 rooms below, large cellar, brick and tiled tailor’s shop, barn, and large courtyard with pump and well of water, and garden; and adjoining, 4 brick and slated Cottages containing two rooms above and two below with brick and slated wood barns and gardens, and let to Joseph Collins, John Cooke, William Hull, and Mr Inwood, at rents amounting to £19 10. 0d; also a large brick and slated Workshop with loft over, let to Mr Spring at per annum. This lot stands in nearly half an acre of ground and is particularly well situated in the best part of Woburn Sands.

The whole of the properties are in excellent repair and let at very low rents, all being capable of considerable increase. They are situate in the main street commanding splendid views, in the best part of the Sands and within a very short distance of the railway station. Each lot is freehold, and land tax redeemed.

To view apply to the respective tenants and for further particulars to Mr John Munday, Fenny Stratford, to J. T. Green Esq, Solicitor, Woburn or to Mr George Wigley, Auctioneer, of Winslow and Fenny Stratford.”

The vendor, Munday, was a timber merchant at Fenny Stratford, and was instrumental in the erection of the Methodist chapel opposite, and also developed Chapel Street. The tailor’s shop was that of Inwood, the first business premises that opened in High Street, before any other houses were erected. The cottages are the shops down to the present no. 55.

Further details of the incumbents of the shops that came after the inn can be found on the page “Our Shops”.