Some of the following publications are no longer available, but those still in print may be purchased at Society meetings. 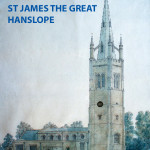 Take a tour of the 12th Century Hanslope church in this latest guide.

World War as far as the 1990s. The collaborative work by brothers Stan and Roy, written in their own style, gives their personal views on the way of life during this period of great change.

The three stories written by Sid Garrett enable the reader to experience country life through the imagination and recollections of a ‘country boy’ as he transcribed them 50-plus years after the event.

The stories provide not only a view of the past but raise questions about the quality of life to this day.

Memories of a Childhood at Tathall End, Hanslope and Higham Cross
(regrettably, out of print)

Beatrice May Anderton (nee Geary) was born on the 21st March 1904.  As she approached her 99th birthday, living in Lancashire, she could still vividly remember details of her childhood, including the death of Squire Watts in 1912.

80 years at Tathall End
(regrettably, out of print)

This book by H T Geary charts his personal memories of life in the hamlet from ploughboy to farmer starting from his birth in 1883 through the Second World War and ending in 1964.

Over 100 years of Hanslope and Castlethorpe Village Policemen
(regrettably, out of print)

This book details the holders of the post of ‘village bobby’ from 1857 until 2000. Written by PC 994 Michael Shaw, it gives an interesting insight into the men who have held the post, together with photographs of them and views of the village.