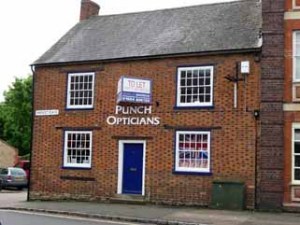 Numbers 27 and 28 Market Place are on the south side of the Market Place. At the beginning of the 19th century it was still one of the two Cock Inns, opposite each another at the entrance to Silver End. The landlord was Mr Munday, who a few years previously had written a letter to a customer who had not paid his bill which makes very amusing reading. By the 1820’s Leonard Lord was landlord, living there with his wife Mary and two children.

By the 1851 Census John Harding, aged 33, was recorded as the Beer Seller, but no further census entries record it as a public house. The premises were converted into two cottages, and like many properties in Olney, had one front door opening onto a through passageway with entrance doors opposite one another on either side of the passage. 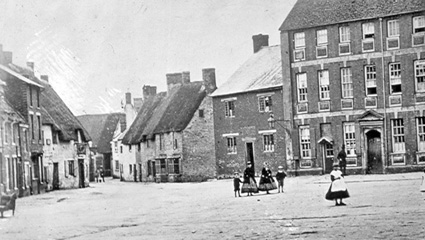 By the 1920’s Rowland Perkins had followed his father as a builder and undertaker. In 1936 the Register of Electors lists Roland Perkins and his wife Rhoda still residing there. Rhoda was still living at No 27 according to the 1951 Register of Electors, together with Alice and Hilda Wesley and Frank Ludgate. Alice and Hilda Wesley were part of the family that ran the Wesley bus and coach firm and probably lived in the ‘Number 28’ section of the building.