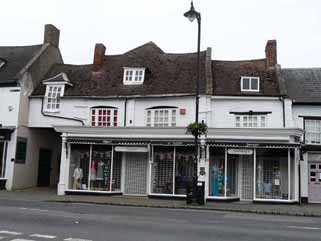 Number 5, the building to the left of the lamp post in the photograph, was (and still is) another prime site on the Market Place and was probably owned by Robert Andrews at the time of the earliest levies in 1801 and 1810/11. The premises were probably empty at the time of the 1833 levy as they are recorded as ‘late Bell’.

By 1841 Daniel and Hannah Clarabut were running their drapery and millinery business from here. A later advertisement stated the business was established in 1837, when Daniel would have only been in his early 20’s. Daniel was also agent for the Norwich Union Fire Insurance Society. He died on 5th October 1880.

At the time of the Levies, Number 6 Market Place (the part of the building to the right of the lamp post in the photograph) was occupied successively by Mrs Lovell, Mrs Dickens and John Robinson. By 1841 Charles Robertson lived on the premises with his wife, Harriet, and five sons and four daughters. Charles worked as a Saddler .

William Clarabut took over Number 5 and during his time purchased Number 6, probably from Charles Robertson, adding it to his growing establishment.

In the 1910 Revenue Survey, William Clarabut is recorded as the owner/occupier and advertising at the time indicated that drapery was undertaken in Number 5 and tailoring in Number 6.

It would appear from the 1911 Census that Charles Mortimer Allen, aged 34, had taken over the business. Charles, the son of a Baptist Minister, lived on the premises with his wife Katy, two sons and a daughter. Two boarders, a dressmaker and an assistant, were also living there. 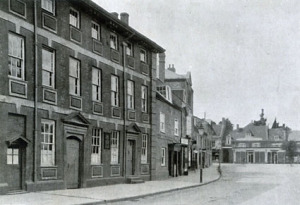 Charles engaged a partner, Charles Cook, as in 1939 the business was advertised as ‘Allen and Cook Drapers’, but presumably this partnership did not last long as the business soon reverted to ‘Allens of Olney’. 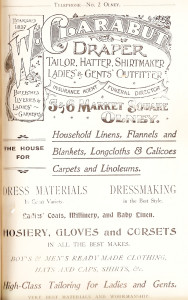 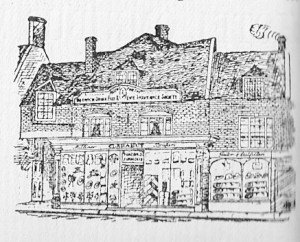 Sketch of Clarabut’s Frontage as it appeared in Ratcliff’s 1907 ‘Olney, Bucks’ Almanack
Click for enlarged image