The Hearth Tax was introduced in 1662 as a means of raising additional revenue. Householders were required to pay pay two shillings for each fire-hearth, one shilling at Michaelmas and one at Ladyday (25 March). Only those whose house was worth more than 20 shillings a year and who paid church and poor rates were liable for hearth tax. The tax-collectors had to collect an exemption certificate from those who were not eligible to pay. The certificate had to be signed by the incumbent, churchwardens and overseers of the poor, and countersigned by two Justices of the Peace.

The tax was imposed between 1662 and 1688. Only tax returns for 1662-1666 and 1669-1674 were sent in to the Exchequer. Outside these dates, the tax was farmed out to private collectors who paid a fixed sum to the government in return for the for the right to collect the tax. These collectors did not have to send returns to the exchequer. The most complete return for the country which survives is that for 1664.

The occupier of every house in the parish had to submit a written statement of the number of hearths in his house to the parish constable. The constable made out a parish assessment and collected in the tax half-yearly. He then drew up a return of the money collected, or made notes on the assessment that the money had been paid.

These parish returns were submitted to the Clerk of the Peace who made a county roll which was sent to the Exchequer. The orginal copies made by the constables are likely to be the most accurate because the constable was familiar with the names of the local people.

The Society is in receipt of data for Olney only for the three years 1670, 1671 and 1672. The data was kindly provided by Nigel Sawyer and Sue Blake kindly assisted in the transcription of the names.

The statement at the top of each exemption certificate (broadly translated) reads as follows:

We the Minister of the Parish of Olney in the County of Bucks with the Church Wardens of the said Parish, do hereby certify unto his Majesty’s Justices of the Peace for the said County of Bucks, That we do believe that the respective Houses wherein the Persons hereunder named do Inhabit, are not of greater value than twenty shilling per annum upon the full improved Rent. And that neither the person so inhabiting, nor any other using the same messuages (dwelling house with the adjacent buildings and curtilage for the use of the household) has, or uses, or occupies any Lands or Tenements of their own, or others, of the yearly Value of twenty shillings per annum. Nor has any Lands, Tenements, Goods, of Chattels, of the value of ten Pounds in their own possession, or in the possession of any other in trust for them. And that the said houses have not above two Chimneys, Fire-hearths, and Stoves in them respectively.

Specimen statement at the top of each exemption certificate

The names on the certificates for the three years 1670, 1671 and 1672 are shown transcribed in the table below. The spelling of the names is reproduced as per the original certificates. Unfortunately, very little information is given on the certificates regarding the occupation and status of each person .

The part of each original certificate depicting the names is shown under the table. 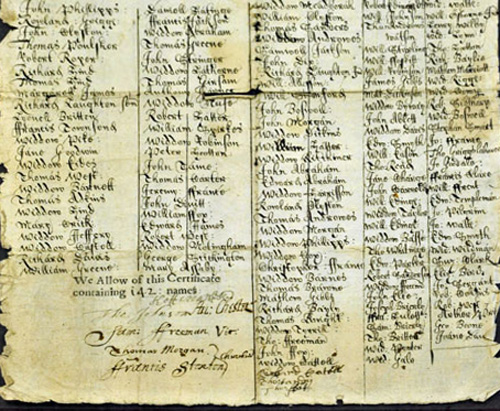 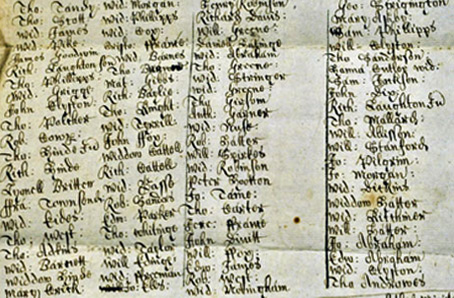 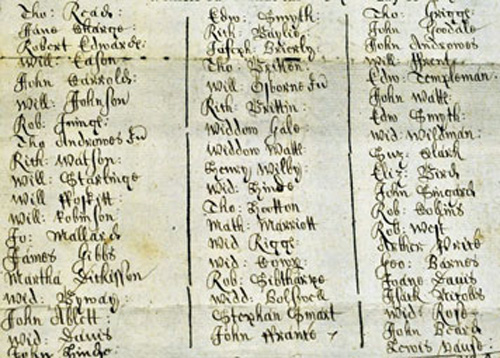 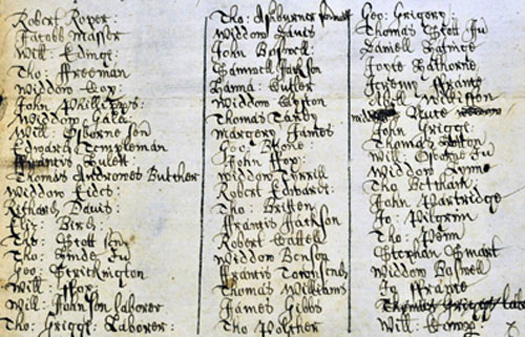 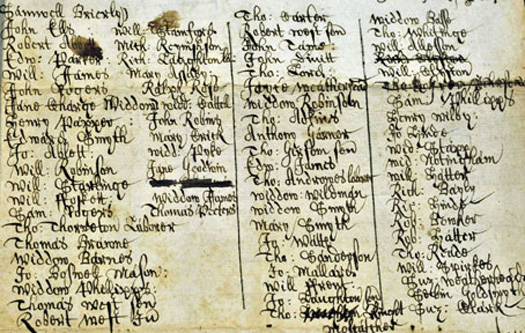