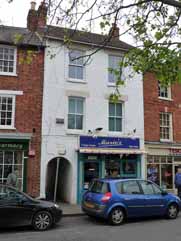 No 15 Market Place, 2012
Click on image to enter ODHS Buildings Database for this property

Number 15 Market Place was occupied by Thomas Berrill and recorded in the levies of 1801 and 1810/11. It was probably this man or his relatives at the nearby King’s Head who gave their name to Berrill’s Court, the passage which leads to East Street, as seen in the photograph. William Styles lived in the property in 1833, but by 1841 Henry Flood had established his hairdressing business there. Three years later Samuel Flood is listed as the hairdresser together with his wife, Elizabeth, who made straw hats.

In 1883 a Henry Flood was working as a hairdresser at Number 15, but this Henry probably shared the shop with F Cottman, a family Dispensing Chemist, as they both advertised from the same address, but in different almanacs. The following year Mr Cottman also advertised beekeeping supplies. 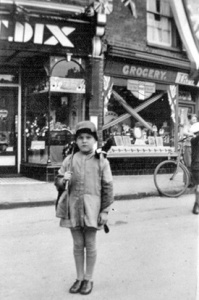 This property did appear to have a rapid throughput of tenants. The 1891 Census lists Sophie Bulmer a confectioner, but by the following year Charles Dimmock had taken over the premises as a house furnisher, calling himself a cabinet maker and he also sold lamps and oil. He still advertised in 1907.

The 1910 Inland Revenue Survey records R Paggett as the owner and Samuel Skevington as the tenant. The 1911 Census lists Samuel Skevington as an ironmongers assistant. By 1920 a tailor, George Albert Clayson, occupied the premises. E J Pope & Son continued as tailors into the 1930’s, then in 1935, William Dix advertised himself as a Wireless Dealer. (see photograph to the right taken outside his shop). William Thomas Dix and his wife Phyllis May Dix are listed at this address in the 1936 Register of Electors.

The 1951 Register of Electors lists Harold and Violet Dearsly at residing at this address. 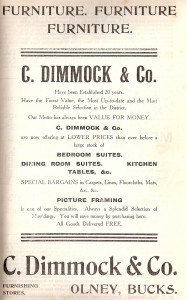 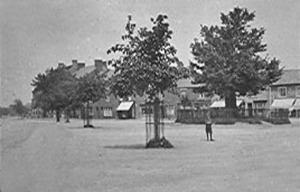