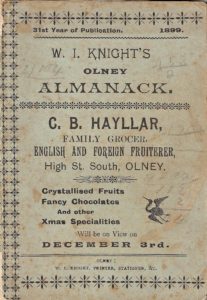 Mr W I Knight produced a series of Almanacks. This one, for 1899, was the 31st year of publication, but at one time they were published in association with Mr Lyon.

Not very much is known about William Inkerman Knight. Presumably his middle name was in recognition of the Battle of Inkerman in the Crimea on 5th November 1854, a victory for the British and French armies. (He reputedly had the nickname of ‘Inky’.) His business premises were located at 7 Market Place (now Jays of Olney) situated between Allen’s and the Bull Hotel.

Although this almanack is not as comprehensive as the one published by Oliver Ratcliff in 1907 (and reproduced by the ODHS in 2008), it nonetheless provides an insight into the daily life of Olney during the late Victorian period. The ‘Local Addenda’ and ‘Local Jottings’ sections are of particular interest, as these detail the scope of the public offices and social life in Olney – the ‘Who’s who’ of the time.

In this version of the Almanack, reproduced by the ODHS in 2009, the text of Knight’s original 1899 book has been faithfully reproduced, as have the advertisements. However, the text size has been enlarged to improve legibility and photographs added to aid the pagination sequence. This May 2016 webpage version, using Calameo software, has been uploaded because there were no plans to print the 131 page version reproduced by the ODHS in 2009.

Notes on this Calameo version:
1 Because we have adopted the ‘free’ version of the Calameo software, an advertisement appears with each Part but it can be readily deleted.
2 It is recommended that the reader adopts the full screen ‘publication’ option (see the icon in the top right hand corner of the Calameo window).
3 A couple of pagination idiosyncrasies do appear. These occurred when the original documents were uploaded into Calameo and we have yet to find a simple method for eliminating them. In our opinion they should not impair the reader’s enjoyment of the book.

Click on the link below to view an earlier version of this almanack in PDF format:
Link to W I Knight’s Almanack 1899 pdf