The origins of the internationally known marine engineering business of Edward Hayes of Stony Stratford are rooted in the cotton mills of Lancashire.

After serving an apprenticeship in the Manchester area the first Edward Hayes came to Wolverton in the early 1840’s, to take up a position in the London & Birmingham Railway Works at Wolverton.

However within a few years he had married and started as a schoolmaster and consulting engineer. About this time he also set up a forge and small foundry at Stony Stratford, and commenced agricultural engineering work. 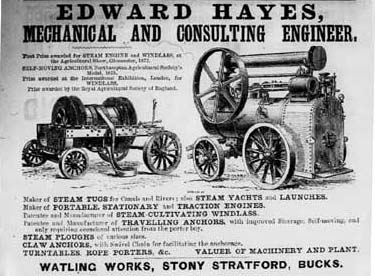 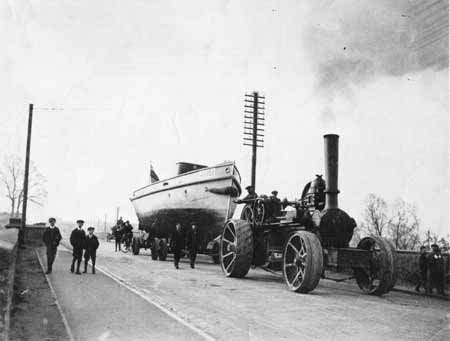 He soon gained a reputation for hard work and sound design and started building farm machinery such as the portable steam engine and windlass illustrated below.

Hayes started building steamboats in the 1860’s at the Watling Works to the south of Stony Stratford, as far from the sea as possible, and 1.5 miles from the nearest navigable water.

Nevertheless the firm built vessels for the far flung corners of the world, including steam launches and tugs used in the exploration of the tropical jungles of South America, the River Nile and in the Arctic cold of Archangel.

Prestigious commissions were also undertaken for wealthy clients, who were impressed by the skill and innovation of the marine engineering emanating from a small yard in a country town. 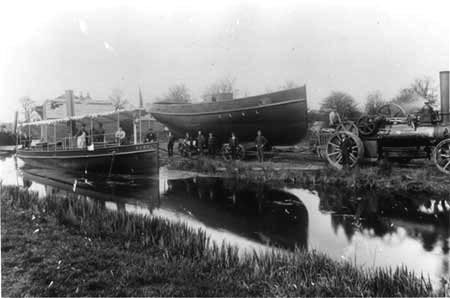 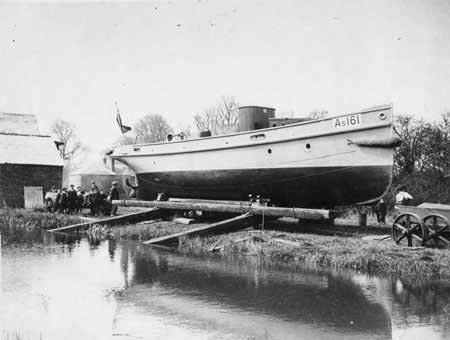 Although the firm had its origins in agricultural engineering, playing no small part in the development and mechanisation of the farming industry, the later development in marine engineering lead to a period of relative prosperity, and government commissions for steamboats.

The Hayes family also provided an education for priviledged apprentices, with a good grounding in engineering, many of whom went on to become Chief Engineers of leading companies, including one of the designers of the Titanic. Stacey Hill Society has been researching the Hayes family and the engineering business, and it is hoped that this will eventually be published.