As you go around the Museum today it is easy to forget that the buildings once served an entirely different purpose as a farmstead. This is also heightened by the fact that the site is now surrounded by housing and industrial development within the city of Milton Keynes.

Before the building of Milton Keynes the whole of North Buckinghamshire was primarily an agricultural area. Stacey Hill Farm was part of the Wolverton Estate lands owned by the Radcliffe Trust and let out to tenant farmers. What do we know of these early farmers, and what traces have they left? Unfortunately materially very little. However by looking at newspapers, census returns, wills and many other archival records a picture can be produced. 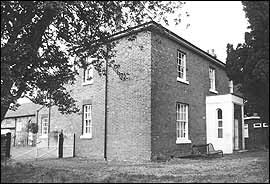 The first tenant of Stacey Hill Farm was William Battams, whose family had farmed at Stacey Bushes, the original farmstead, since 1800. The present farm was built in 1847 to replace the previous building which had become dilapidated. William Battams held the tenancy until his death in 1883, and his wife Martha continued farming until 1888. Her place was taken by John Richards, a Welshman, who was a sheep farmer. He held the tenancy until his death in 1911, when it was in turn taken up by Edward Norman, who came from a local farming family. Under his tenancy the land, which was adjacent to the town of Wolverton, was often used by the local community to hold various events.

One such event was an Air Pageant held in aid of the British Hospital Funds. It took place on the 21st September 1934 at Stacey Hill Farm and its object was to popularise flying and assist local hospitals. It must be remembered that the National Health Service did not exist at this time! In the programme it stated that “The Sky Devils” were the most reliable yet daring aviators in the country; they were all ex-members of famous R.A.F. fighter squadrons and had previously flown in several Hendon displays.

The public were able to see thrilling demonstrations of super-airmanship and all the latest types of machines at close quarters. They also had the opportunity to enjoy the novel experience of a flight in the care of experienced pilots. 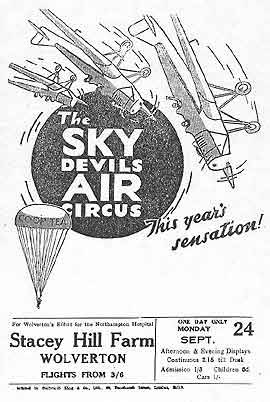 Edward Norman’s period at the farm was mixed with highs and lows. Returning to England after the Boer War, he soon married and was blessed with two sons, however the death of his wife in 1917 was a bitter blow. Happiness was regained in a second marriage, but fate dealt him another blow when he lost one of his sons through a motorcycle accident. The depression of the 1930s brought hard times, but with the assistance of the Radcliffe Trustees, he was able to keep going. However with the onset of the Second World War he moved out to be replaced by the Luckett family.

The Lucketts were another large farming family who took on Stacey Hill and Brickkiln Farms, as a father and son combination. Their tenancy was to last until the 1960s when the Gurney family stepped in until the demise of the farm and the takeover of the buildings by Milton Keynes Development Corporation Landscape Department.

The story has not ended there – the land may have gone, but the buildings remain, serving the community as they always have, and now providing a home for the Milton Keynes Museum.