From the earliest days of the Stacey Hill Collection, now housed at Milton Keynes Museum, there has been a need to conserve and restore donated artefacts to allow them to be exhibited and preserved for future generations.

The Milton Keynes Museum Society prides itself on a history spanning over 40 years in the restoration of a large range of items. Society volunteers can be called upon for a wide range of engineering skills, such as carpentry and metalwork, so that objects from the large to the very small can be restored to their former glory. An excellent example of the Society’s work is the restoration of one of the tramcars used on the former Stony Stratford to Wolverton Tramway, now on display in the Museum’s Transport Hall.

When the collection moved into Stacey Hill Farm, there was a need for a workshop large enough to tackle the largest restoration projects. This was housed in the old cart shed where a concrete floor was laid and the front boarded in. Equipped with benches, a circular saw, planer, sandblaster, many hand tools, and a paint store, etc, the workshop has become the scene of many long hours lovingly spent on restoration projects, intended for eventual display in the Museum.

In addition to the tramcar, other notable items restored to date include: 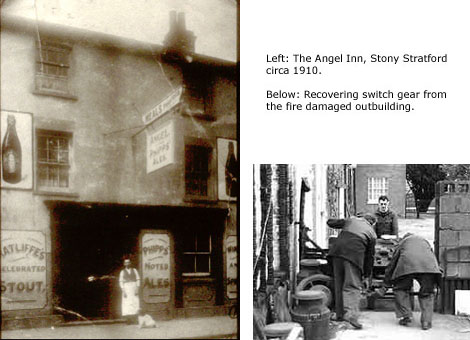 When the Museum suffered a disastrous fire in 1996, many priceless items were lost. Members of the Society provided support to the Museum to clear up the mess, to salvage what they could, and to begin the process of restoration and re-building. One of the first items to be recovered and re-built was the generator that was powered by the Bromham engine. The picture (above right) shows Society members recovering switch gear from the blackened ruins of the farm outbuilding. The switchgear had previously been restored by a Society member and he went on to do it again!

Today, all restoration is undertaken under the supervision of the Museum Director. Not all the restoration jobs are complicated, and the majority can be tackled with a wire brush and a lick of paint. But restoration is not just about engineering skills, and there are many other artefacts that require work, and particular specialist skills. If you feel that you can make a contribution to the Museum restoration team then contact the Museum Director to make arrangements to come along to try your hand.