The remains of Hanslope Castle are situated in the village of Castlethorpe. The castle was probably constructed in the 12th century by William Maudit. There are no traces of masonary on the site but considerable remains of the earthworks of a motte (mound) and bailey type of castle. In the photograph above the mound is in the area of the tall tree, the inner bailey in the flat area just below the mound and the outer bailey where the sheep are grazing.

There would have been a wooden construction on top of the mound. Below is an impression based on a similar site at Berkhampstead. 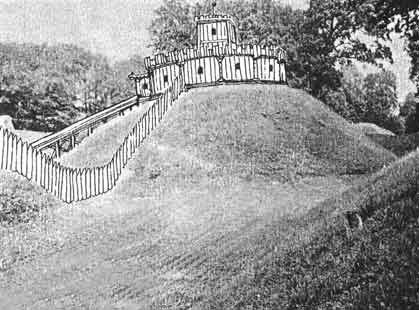 The raised banks would have had defensive palisades (see below). The inner bailey would have contained all the services required to withstand a siege. However, Hanslope Castle did not withstand the siege of Faulke de Breaute in 1215, when the castle was destroyed on the orders of King John.

The following plan of the castle remains within the modern village is taken from ‘Archaelogical Investigations of the Medieval Earthworks at Castlethorpe, Buckinghamshire’ which is in Records of Buckinghamshire Volume 37 1995. 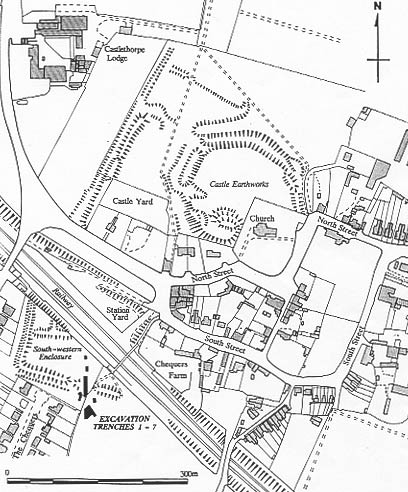