The following accounts of the tragedy were researched at Milton Keynes library by Mark Small, a year 7 pupil at Hanslope Combined School in February 2000.

FIRE BREAKS UP A CHRISTMAS PARTY

The pleasure of a children’s Christmas party in the Church End School, Hanslope, on Friday evening, December 19, was marred by an unfortunate occurence just when the revels were at their height. The programme included a Christmas tree laden with presents for the children, Miss D French, one of the teachers, appeared in the character of Father Christmas wearing a cotton gown and wool beard. Whilst standing on a chair lighting the fairy candles on the tree her clothes caught fire, the occurrence causing something of a panic among the little guests. Nurse Rogers acted promptly and with commendable courage. She immediately rushed to the assistance of Miss French and extinguished the flames and in doing so was badly burnt about the hands. The alarmed children were got out of the school safely and the prospect of serious damage was avoided by the courageous assistance rendered by older visitors to the party. Miss French’s arms were burnt and she also sustained injuries about the face. She was conveyed home in Mrs Courage’s motor car. The outbreak put a sudden stop to what promised to have been the most enjoyable children’s party held in Hanslope for a long time.>

TRAGEDY OF A CHILDREN’S CHRISTMAS PARTY

We very much regret to report that the unfortunate burning accident which befell Miss D French, an assistant teacher at Church End School, Hanslope, whilst acting the part of Santa Claus at a children’s party on December 19, has been attended with fatal results, the young lady succumbing to the injuries she received, at her home, 128 Wolverton Road Stony Stratford, on Tuesday night last. The circumstances of the regrettable occurence which has ended so tragically, were first exclusively reported in last week’s Bucks Standard. Miss French, a highly capable teacher beloved by all her pupils, attended the breaking up festivities in connection with the school, and as Santa Claus was distributing gifts from a Christmas tree when the cotton wool she was wearing over her face caught fire. Through the prompt action of Nurse Rogers the flames were quickly extinguished, but not before Miss French had been severely burnt about the arms and neck. She was conveyed to her home at Stony Stratford in Mrs Courage’s motor car, but despite every care and attention by Dr Cecil Powell and a trained nurse toxaemia developed, and the unfortunate young woman passed to her rest on Tuesday night. Deceased was the daughter of Mr Robert French, and to parents and relatives in their sorrow deep sympathy is extended.

The circumstances attending Miss French’s death were enquired into by the North Bucks Coroner (Mr E T Worley) at the Prince of Wales Inn, Stony Stratford, on Tuesday morning January 1.

Miss Florence French, in evidence, said the deceased was her sister, and was employed as a teacher at Hanslope Church End School. She cycled to school each morning returning home at night. She had always enjoyed good health and on the morning of 19th December she left home in the best of spirits. Deceased told her they were going to have a party at the school that afternoon and that she was going to take the part of Father Christmas. She was very excited over the affair. About six o’clock the same evening she was brought home in a very bad state and had been ill ever since. Deceased, who had been attended by Dr Powell, was 29 last Friday. Miss Amy Tite said she lived at Church End, Hanslope, and was an assistant in the Church End Infant’s School. On the 19th December they had tea at 3 o’clock. After tea a Christmas tree was brought into the room by Mr Roberts and Miss French. Afterwards deceased went to witness’s home to dress. She dressed as Father Christmas. She wore a cotton dress with cotton wool beard. There were lighted candles on the tree, but she could not say how many. Witness was by the tree with Miss Lloyd, the head mistress. Miss French was standing on a chair taking presents from the tree and all of a sudden witness heard Miss Lloyd say: ‘Oh, Miss French, you are on fire.’ Witness was on the other side of the tree taking presents off, and as deceased ran up the room she was all in flames. It seemed as though she was in flames all of a sudden. People shouted to bring coats and witness went for her coat, and could remember nothing more. She thought the doors were open but she could not say for certain. There were 75 children in the school, and some mothers were present.

By Mr W L Marsh (who represented the relatives): ‘We opened the school at 9 o’clock, closed at 11.30, returned at one o’clock and finished at 3.30. Those were the usual winter hours.’

Mr. Marsh: ‘Did this sad accident happen in the usual school hours?’

Witness: ‘It would have been in school time.’

Mr. Marsh: ‘I take it Miss French was at the time in the execution of her duty as a teacher at Hanslope school?’

Witness: ‘Yes.’ She added that on this particular day they were working to summer time , so that the school would not close so early.

Miss Dorothy Rogers, Hanslope village nurse, said she attended the children’s Christmas party at the school as a guest. She was getting some presents from the tree when she heard Miss French jump and saw her rush for the door in flames. Deceased had a lighted candle in her hand, one that came off the tree. As she could not catch hold of the deceased as she was making for the door she put out her foot and tripped her up and by throwing a table cloth round her put out the flames. Witness’s hands were burnt. Her opinion was that the cotton wool beard first caught fire. Deceased was conscious all the time. The burns were chiefly on the left ear, the neck and both arms. The whole of the top part of her gown was burnt.

Dr Cecil Powell, Stony Stratford, said he took the case in hand after deceased was removed to her home in the evening of December 19. She was burnt on both arms from the hand to the shoulder, and on the neck, the front of the chest and face. The burns were very severe on the left fore-arm, right hand and chest quite deep burns right through the skin. He looked upon it as a serious case. The question arose as to whether she should be removed to hospital, but a trained nurse was engaged and everything that was possible was done for her. The cause of death was toxaemia- a sort of poison produced by charred skin. This was set up as the dead skin began to be torn off. Up to three days prior to her death deceased was going on very well, but she then got into a semi-comotose state.

The Coroner, in returning a verdict of ‘accidental death’, said it was easy to be wise after an event. It was as dangerous a proceeding as could be indulged in to go round a Christmas tree with those frightfully combustible trappings on and with flames in close proximity and with children in the room. He knew it was done very often. From time to time it was done with serious results as on this occasion. Nurse Rogers seemed to have done all she possibly could have done, and he didn’t think anyone could have done more. It was a most unfortunate accident, and about as sad a case as possibly could be, and one’s sympathy went out to the friends who remained.

The following Miss French Memorial Service took place in May 2000. 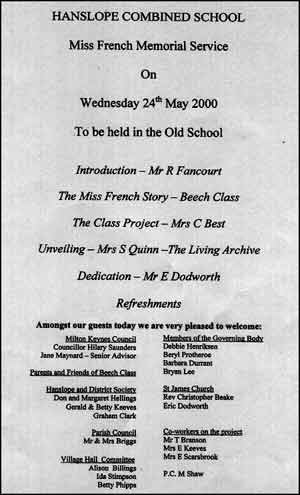 The children involved with this project raised money to erect a plaque to the memory of Miss French in the Top School which is now the village hall.