This is a walking tour around the centre of the village with photographs of some of the buildings and places of interest.

Green Manor was formerly a pub called the Green Man, but is now a private house. The photograph shows the house in about 1910.

At one time there were as many as

12 public houses as well as the Working Men’s Club in the village, but nearly all have long been closed.

Green Manor is in the Market Square.  In 1293 the lord of the manor, William Beauchamp, Earl of Warwick, was granted a charter to hold a market in Hanslope. 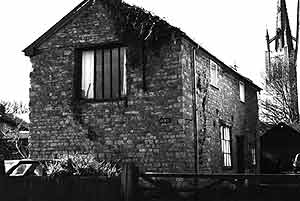 This house in Gold Street used to be a blacksmith’s forge. It once rang to the hammering of metal horseshoes for local farmers and travellers.

Past the old forge on the right is The Green. This old postcard shows some of the   houses on the Green. 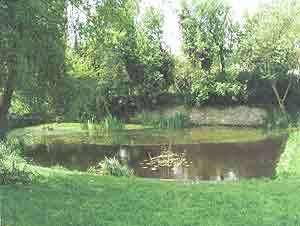 The old Horse Pond now has occasional ducks swimming on its surface. The pond is only fed by rainwater – there is no spring. In very dry summers it can dry out.

Vicarage Court is one of four vicarages known to have existed in Hanslope. The first one was The Old Vicarage, off the Green, which was used until 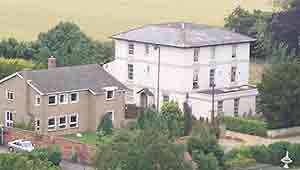 Turn back past the Village Pond, and right after the Green past Maltings Farmhouse on the corner. The photograph of Maltings Farmhouse, dating from about 1914 when the house was still thatched , shows the then owner and his sister with their housekeeper. This is one of the oldest houses in the village, with the date 1624 set in stone on the front. 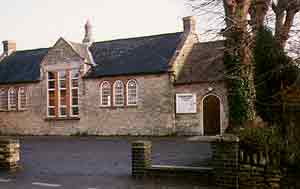 The Village Hall is very familiar to older residents as the Top School,which was built in 1840 by the Watts family. 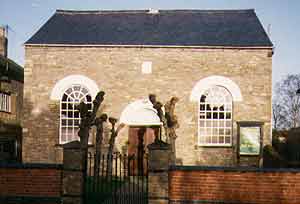 Continue on Gold Street passing some cottages and houses and the Gold Street Gospel Hall which shows its date of building as 1809. 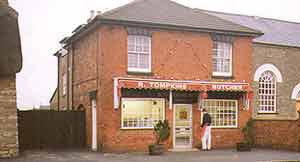 The village butcher’s shop sells meat and vegetables. Many villagers remember when animals were slaughtered on the premises, in the buildings at the back of the shop.

Horseshoe Cottages, across the street from the butcher’s shop, is one of the prettiest features of the village, with its thatched roof and its gentle curve. If you look closely you can see that it used to be several cottages. 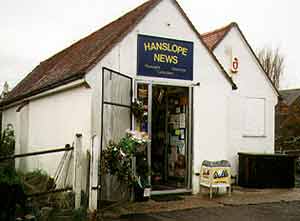 This is a small store in a rather unprepossessing building. It started life as the village telephone exchange – with a manual exchange of course. The new automatic exchange was built in a new building at the other end of Gold Street, on the opposite side.

The Black Bull was once one of Hanslope’s many pubs, but it closed in 1938.  The photo shows Abraham Northrop with his wife and daughter.  He was the publican in the 1890s.

The Watts Arms has stood in its position looking down The High Street since 1821. It is named for the Watts family, squires of Hanslope for more than 200 years. The pub is now owned by Charles Wells brewery of Bedford.

Continue northward past the ends of Eastfield Drive and Western Drive.

An earlier building known as Green End School was demolished in 1969 to form the playground for the new school.

Go back and turn right into Castlethorpe Road to find Hanslope Surgery.

This surgery replaced the old one which is almost opposite, at 3 Castlethorpe Road, on the corner of St. James’s Close.

Dr Cooper was the la 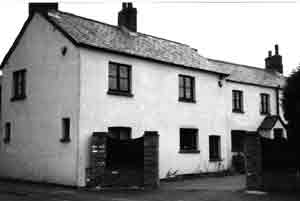 st doctor to live at the old surgery at 3 Castlethorpe Road, until sometime in the 1960s.  His waiting room only held 6 or 8 people. Any more patients would have to queue outside.  Medicines were made up by the doctor on the premises.

The New Inn, 14 High Street, is another of Hanslope’s former pubs. The pub was closed when the building was bought by W Willingham. 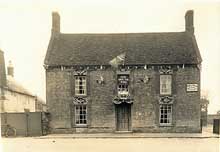 The photograph on the left was taken at the 1936 Jubilee when the house was Willingham’s coal merchants.

The Cock is one of the three pubs still open in Hanslop.  The original building, however, did not survive.  It is shown in the photo with its stone walls and thatch roof, and was demolished in the 1930s. The modern Cock shown below was built in its place.

These buildings were the first Cock public house. When John Wesley came to Hanslope, the landlord underwent a conversion and closed the pub. He changed the building to two shops, a drapers and a grocer.  Since then the building has housed a number of shops including a butcher. The butchers had its own slaughter house at the back and a metal rack can still seen just above the door.  The Cock public house reopened across the road under another landlord – see above. 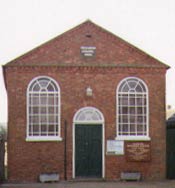 18.  The Club and Stafford House

The Working Men’s Club opened in 1896 and is still serving drinks today, making it one of the survivors from Hanslope’s many hostelries. Previously a village bakery was  here.

Continue along the High Street past Stafford House shown here. At one time this was the village workhouse.

Return to the Market Square where the tour began. Then turn right into Church End and up towards the church gates. 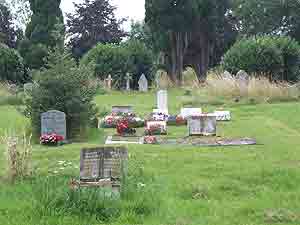 Hanslope churchyard contains some locally famous remains:  Alexander McKay (1804-1830), who died after a bare-knuckle prizefight in nearby Salcey Forest, and Joseph Knibb (1640-1711) clockmaker of London and Hanslope.

St. James Church with its spire almost 200 feet high is a local landmark, visible from many local roads and also from the M1 motorway and the West Coast railway line. Its earliest parts date from 1160. Perhaps one of its most memorable events was in 1804, when after a terrible storm the spire collapsed. It was later rebuilt twenty feet lower than its original height.