After a quiet start to each day, we enjoyed an almost constant stream of visitors, some just curious, some already very knowledgeable. Many had family stories or recollections of WW1. One visitor produced a soldier’s poems he had rescued from oblivion and which you can now see here on this website: unfortunately we didn’t this visitor’s name or details of who gave him the poems…

A big thanks to everyone who helped with the two day event. Our efforts were much appreciated by visitors, by the organisers, and by other exhibitors.

Special thanks to Kevin Varty and Charlie Wyn-De-Bank who, yet again, were prepared to allow members of the public to enjoy looking at and even handling items in their collections: of all the displays in Middelton Hall, our was the one with the most heritage objects for people to appreciate: they jolted many memories and brought some people into contact with the harsh realities of war for the first time.

Here are a few photos:

The MKHA hired the big blue display panels, which fortunately blended well with our
own table-top display unit. Kevin, Don and Jane stand behind the impressive display
of artefacts.

Ian Chambers’ “Local Heroes from Around the World” raised lots of interest.

The other side of the big panels carried the Story of Albert French, kindly loaned by
The Living Archive: we were amazed at how many people read every word on
all 6 boards. In the background, Joseph and Kevin chat during a lull.

Kevin puts some children in a school party through the colour-blindness test
used on WW1 recruits: they passed! 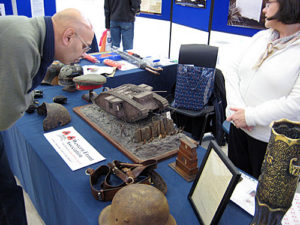 A visitor examines the model of a C19 tank built by Charlie.