Click on the photos for a much bigger image 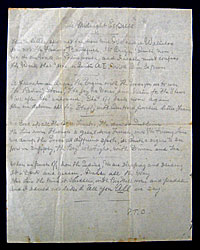 There’s a little spot not far from here, we call it Waterloo,
It is not the famous battlefield it’s “Origin”,s quite new.
We do our work as Porters would and I really must confess
The work that’s done is quite A.1. with Our Express.

A Frenchman drives the engine with the goods for us to use
The Ration Store – The Joy No Mores – and water for the stews.
Well after She’s unloaded She’s off back home again
Then we deliver all the Stuff with our Handpushed little train!

We load up all the little trucks, the Idea so Sublime,
The line runs through a great long trench into the Firing Line!
We dump the goods at different spots it’s quite a sight to see
How we supply The Boys “who fight” with Dinner and with tea!

When we push off the Siding we are slipping and sliding,
It’s dark and greasy, muddy all the way
This line the mind it muddles with big shell hole and puddles
And I should not like to tell you all we say!

Sometimes we shot right off the Line into a big Shell Hole
– then you hear some lovely language – oh dear me
what with pushing off and pushing on it drives you up the pole
but we get there, don’t forget it, By Degree.

The Drummers act as “Porters”, on arrival they are sorters
As the meat and bread gets mixed up with the tea
What with “wizzy’ bangs round our quarters and noisy
French mortars, you can bet your life its not quite all as Spree!

There are shot and shell flying but the Huns we are defying
To locate our magic railway that is not so plain to see,
And with Star shells all around us we don’t trouble for the
Bounders but we push and shove the truck along as happy
As can be.

The Weather is quite rotten, the truck it is a hot one
Our General knows a thing or two it’s very plain to me
It is just his ‘magic’ system to defy them and to twist them
It’s British Brains that made the Trains to give “The Boys”
A spree.

There is danger on the line of course, but Tommy wants his grub
The Officers want food as well, from Colonel to the Sub
But of all the Mystic Mysteries that ever you did see
Is the handpushed little railway on the line to Germany! 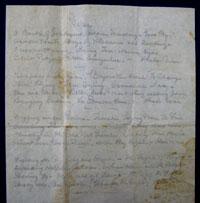 Fighting for our King and Country – the Fight of Right –
Defending helpless children, Womens’ honour –
With Might.
Showing to the World at large the Way to Fight
Steady ever, any weather, “God is for the Right”
That’s WAR!