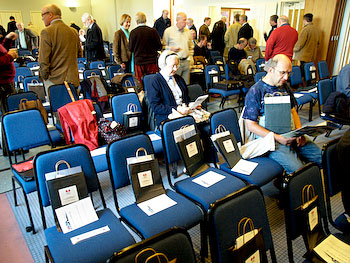 Welcome packs were in position, ready for the off

The third seminar organised by these two branches was another success with all tickets sold and a superb day had by attenders, speakers and those manning stalls. 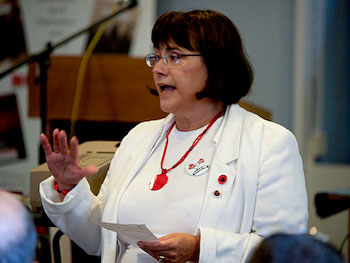 After an introduction from the chair of the Milton Keynes branch Jane Backhouse (including a minute’s silence), the day got off to an excellent start with a most lucid talk from our President, Correlli Barnett, entitled ‘1918: Victory and Defeat’ 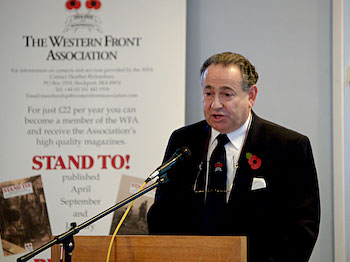 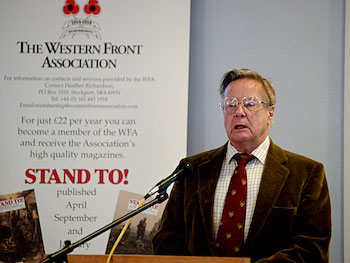 In this he described how the German request for an armistice came as a surprise to many amongst the Allies, who had been contemplating the 1919 campaign.

But the year had started very differently. Russia was effectively out of the war, the Italians were in trouble, the situation in France and Flanders was at best static, and nearly a million British Empire troops were tied up in Palestine, Mesopotamia and Salonika.  For the Allies, a defensive posture was inevitable in the opening months of 1918. For Germany, the outlook was rather different. By now the country was effectively a military dictatorship under Hindenburg and Ludendorff. The latter saw that Germany’s only chance to secure a decisive victory was to take advantage of troops released from the Eastern Front before American strength could build up. The problem was that Ludendorff, while skilled in battlefield command, lacked any wider knowledge, and many of the demands he placed on the German nation and industry to support his plans actually damaged Germany. The Treaty of Brest-Litovsk in March 1918 was very harsh on Russia (rather tending to strengthen Allied resolve), and in consequence required a heavy commitment of troops to enforce it. 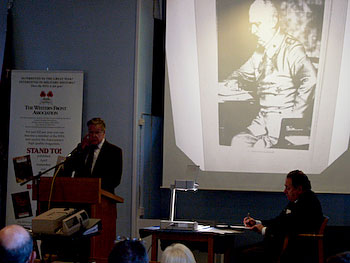 While the German offensive launched on 21st March was an undoubted tactical success, it lacked a clear strategic purpose.  Its thrust took the army too far on the left flank and failed in the aim of splitting the British and French armies. By the time follow up assaults were launched, the Allies were able to contain the situation, and by June American forces were present in greater numbers than Ludendorff had thought possible. The gamble was over, and in August the Battle of Amiens produced the ‘black day’ of the German army.  By now the British Army was the best equipped in the world, benefiting from Britain’s development of a well co-ordinated war economy.  Industry had gone from ‘craft workshop’ manufacturing to mass production in vast factories. Consequently, the army was supplied with the best artillery, aircraft and tanks, and at just the right time its divisions had been brought up to full strength.

Although Ludendorff’s mental state was now beginning to crack, Germany made no diplomatic moves in August.  Only with the American victory at St Mihiel at the start of September, followed by British success around Ypres and the breaking of the Hindenburg line, did Ludendorff propose an armistice, before the Allies were on German soil.   Fittingly, Correlli Barnett concluded with a tribute to the British Army which bore the brunt of the 1918 fighting.
(Report by Andrew Gould) 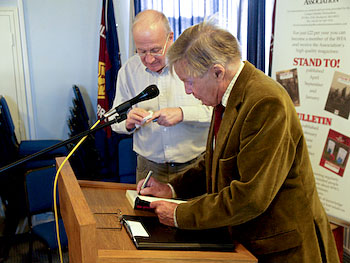 Our second talk came from Dr. Bryn Hammond, entitle ‘It was Willing to be Adopted and Rewarded Us by Doing Valuable Work:  The British Army and Tanks in 1918’. 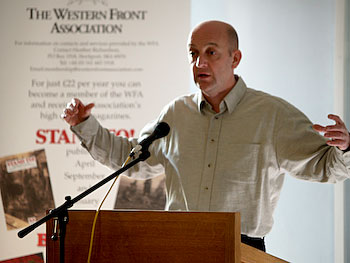 Bryn Hammond is a member of the Centre for First World War Studies, the British Commission for Military History, and the Western Front and Gallipoli Associations.  Bryn argued that the initial success of the tanks at Cambrai in November 1917 had misled commanders as to what tanks could achieve.  In reality, Cambrai was an all-arms success with improvements in artillery and infantry tactics leading to the achievements of the first day, but subsequent days were marked by failures to co-ordinate forces.   The tanks of 1917 were little altered from 1916, but in 1918 great things were expected from the new Mark V, the Mark V Star (a supply tank), and from the faster, lightly armoured ‘Whippet’ tanks.

However, until the American forces joined an Allied offensive, it was planned that the Allies would be on the defensive for much of 1918. British GHQ identified a number of uses for tanks, from supporting large raids behind the German front line, to their use as ‘savage rabbits’ by surprising attackers and crushing them with firepower, so delaying or stopping an attack. Unfortunately some tanks and their crews were wasted in ‘mad, ridiculous and stupid’ operations.

The initial success of the German March offensive quickly dissipated itself although tank crews became casualties when their vehicles failed mechanically or ran out of fuel. Other crews were ordered from their functioning tanks by infantry officers to create defensive positions using their machine guns. However, ‘Whippets’ were successful in routing columns of Germans and in destroying HQs and supplies behind the front.  By late spring the tanks, infantry, artillery and RAF bombers were being trained together as a co-ordinated force. It was also recognised that tanks should not enter villages or woods, but rather ‘envelope’ those positions leaving the infantry to mop up. Bombers were encouraged to destroy field guns being used in an anti-tank role. 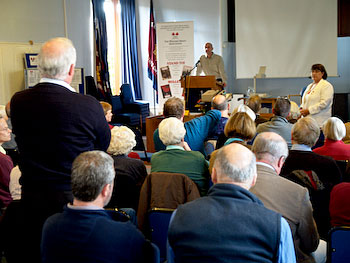 By autumn 1918 tanks were not used in all battles. Different tank types were given roles for which they were most suitable. As the Allies rolled into the Hindenburg Line, tanks suffered from wear and tear and over-long lines of communication. However, commanders accepted tank casualties in order to get through the Hindenburg Line and into open country by using ‘what we have now rather than wait’. By the Armistice, British tanks had become fully integrated into an extremely effective all-arms war-winning combination.
(Report by Joseph Cresswell)

After an excellent lunch, we were both entertained and moved by a most unusual musical performance from the Living Archive Band, a local group of singers and musicians which celebrated the service given in the war by local people, both soldiers and civilians. 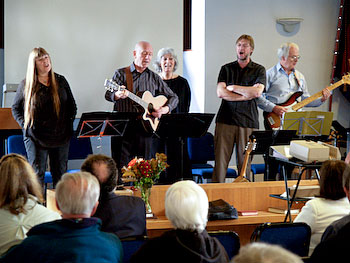 The talk by Professor Peter Simpkins, former senior historian of the Imperial War Museum and Vice-president of the Western Front Association, was entitled, ‘It’s Not How You Start, It’s How You Finish: Some Case Studies of British and Dominion Divisions in the Advance to Victory.’ 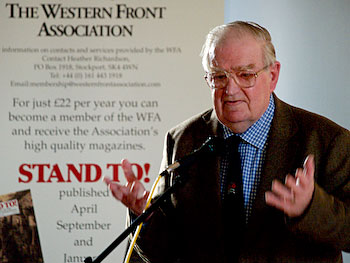 The ‘Start’ did not go well, with loss of many experienced officers in 1914 and 1915, culminating in disaster on the Somme.  The successful ‘Finish’ resulted from changes that began in 1916.  New weapons and new techniques were introduced and, above all, there were new and competent men appointed, like Arthur Solly Flood.  Among the able men that Professor Simpkins singled out was Sir Eric Geddes who served in the Ministry of Munitions and revolutionised the transport and supply system, logistic reforms that were bearing fruit by 1918.  There were many new commanders at brigade level, for example Harold Higginson, commander of the 53rd infantry brigade, who proved to be truly gifted. 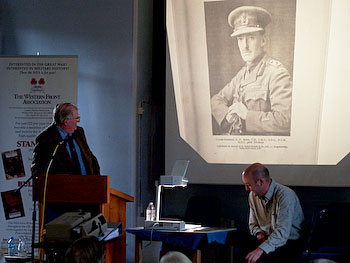 The task that faced the British Army in 1918 was challenging.  The German army in the west had been strengthened, while troops were taken from the Western Front to relieve pressure elsewhere.  Many of the soldiers employed during the final advance were 18 and 19 year-olds, and crucial in bringing about success were the junior officers, of whom many showed outstanding leadership qualities in charge of the  conscripts.   Peter Simpkins ended by paying tribute to the British infantry that fought longer and harder in the 100 days than at any other time in the war.
(Report by Pamela Jenkins)

Paul Chapman was our final speaker for the day, who presented ‘In Memory And In Mourning’. 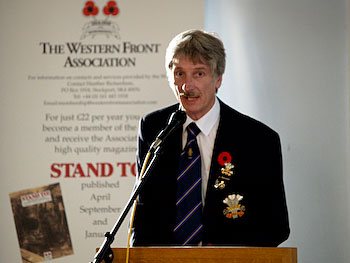 A founder and former chairman of the Northampton Branch, Paul is a keen amateur historian and regular visitor to the battlefields of northern France and Flanders, in particular the Ypres Salient to which he has arranged and escorted tours to over a number of years.  He is also a member of the Talbot House Association, Poperinghe, the author of two books about the house and its vicinity during the Great War, and the person who discovered the identity of the lady who modelled for the statue ‘The Spirit of Canada’ on the Canadian National Memorial at Vimy Ridge. 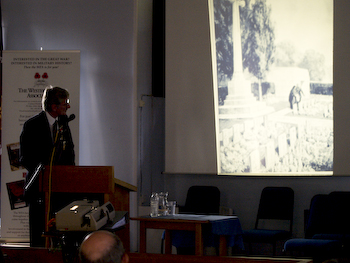 ‘In Memory And In Mourning’ was a snapshot of just some of the 10,000 individual stories that Paul has researched over some seven years. His presentation, well supported by photographs Paul had taken on his visits, touched on many of the moving tales of suffering and heroism in that remarkable period. The individual tragedies explored, and sheer scale and depth of the sacrifices endured all around the salient, provided a fitting close to the timetable.
(Report by John Hackett) 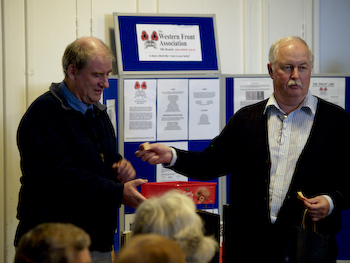 It is also right to mention the ‘stalls’ that helped to keep the audience well occupied during the breaks: 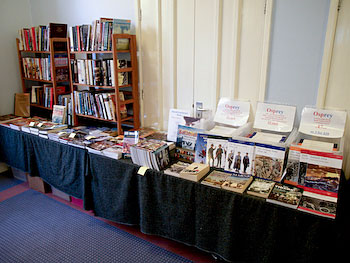 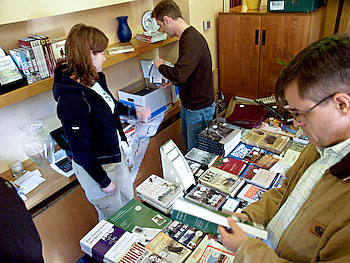 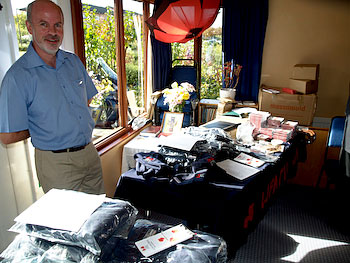 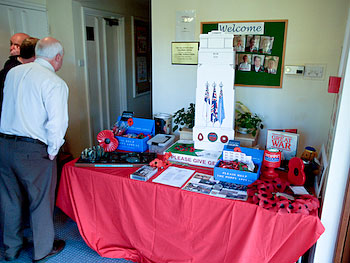 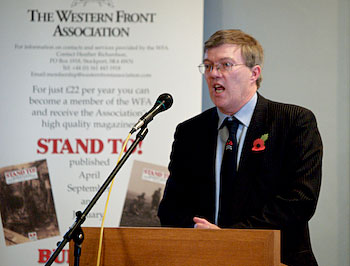 The day concluded with enthusiastic congratulations and thanks from WFA chairman Bruce Simpson.