Cranfield is a village near Milton Keynes. In 2007, The Cranfield Branch of the Royal British Legion organised a Remembrance competition for local young people. Here are a few of the winning entries: 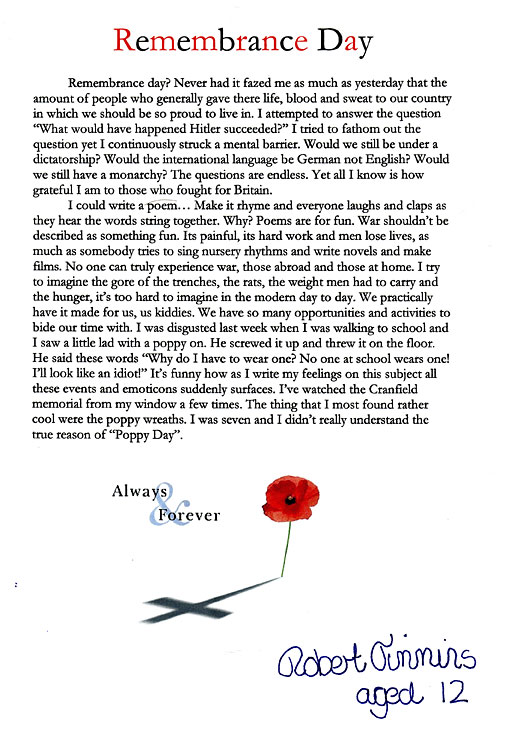 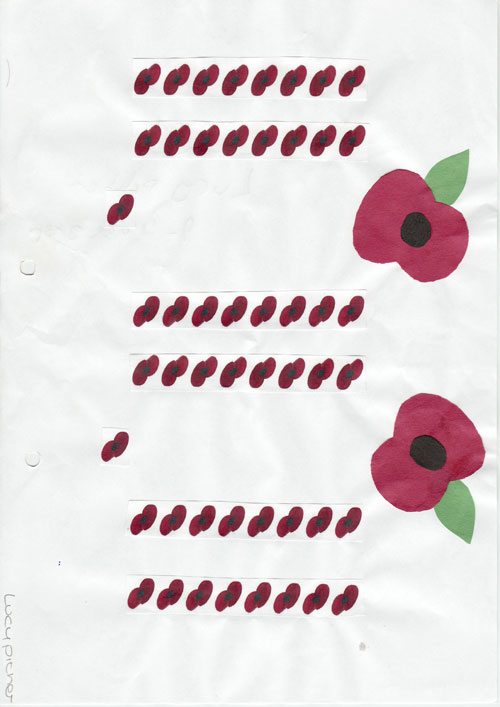 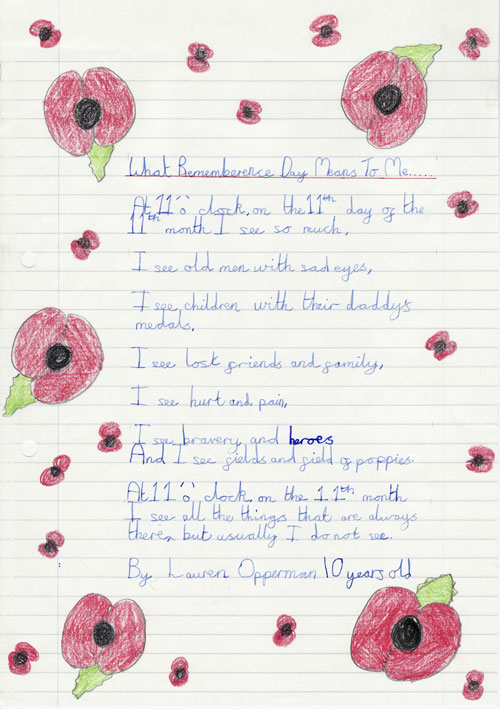 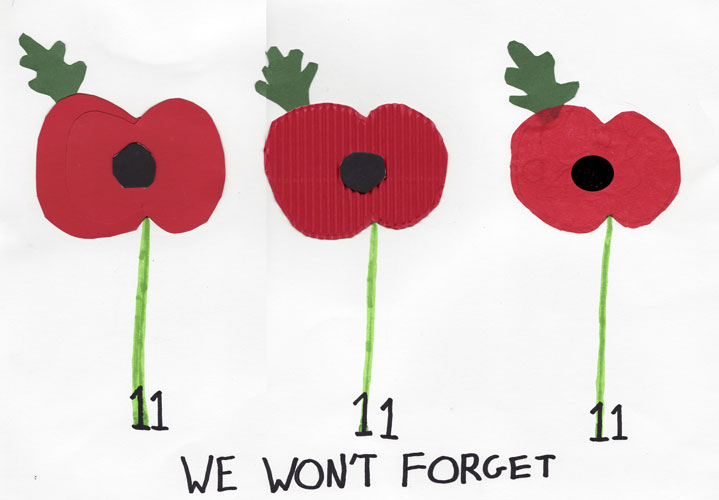 Remembrance is vibrant red,
It smells of flowers on a grave,
Remembrance tastes of salty tears,
It sounds of two minutes worth of silence,
Remembrance feels like an eroded pebble on a beach,
Remembrance lives in the heart of a broken –hearted parent.

War
War is crimson red
It smells of wet soil
It tastes like blood
ar sounds like gun shots
It feels like the pain you get when you read that telegram
War lives in a foul, filthy trench.

The date of three elevens
One for day, month and time,
But is there more to this triple date
Than what springs to mind?

People falling all around,
Hitting hard earth and ground ,
We will fight with our today,
No matter what others say.

People sometimes think
There is no meaning or link,
Between poppy and battlefield,
But there is ….

Shells churning up the ground,
People will fall and not be found,
But still we fight, hard and strong,
For all our loved and little ones.

When we live on the winning side,
We think enemy armies are bad.
But we must remember, tell with our voice.
They as well, didn’t have a choice….

Always going around,
Never making ground,
Still, we all will fight for
The end of this endless war.

Remember the poppy, for those who fought,
On every side of every war,
Now tell your friends, and so in peace
We will remember them.

Remembrance is vibrant red,
It smells of flowers on a grave,
Remembrance tastes of salty tears,
It sounds of two minutes worth of silence,
Remembrance feels like an eroded pebble on a beach,
Remembrance lives in the heart of a broken –hearted parent.

The war began, year 1914
Men of all ages left their homes
They went to fight in the first world war
With bombs and guns and aeroplanes.

They dug trenches deep and tunnels long
With spoons and spades and their own bare hands
They fought in the army, risking their lives
To own the land far and wide.

4 long years of raids and bombings
With rations and deaths and diseases all round
It was hard to bear for mothers and daughters
So let’s remember the army today.

Right! Let’s all remember
Every soldier that died for us,
Many years ago – but not forgotten.
Extra courage and bravery that each person who died had,
Men and Women, who gave up their lives,
Brave people, who did not think of themselves, but of others.
Respect their memory.
Also remember doctors, nurses and the clergy who also died.
November 11th is a date to never forget.
Care for those who were left behind without their loved ones.
Every day we will remember.

Do not forget what Remembrance day means.
Always be respectful to their memory.
Yes! This is a day we will always remember.

Yesterday and days before, they gave for us.
An ultimate sacrifice absorbed in history.
With a belief in righteousness.
Each with their own story.
And then, the poppies grew red.

Today and now, it continues.
Our heroes still fall in fight.
Always something in the news.
With no end in sight.
And today I wear my poppy to remember the dead.

Tomorrow and forever, I hope for peace.
For everyone to unite as one, whatever they believe and do.
I wish for all the fighting to cease.
A better future to look forward to
And until then, I will wear my poppy to remember the dead.