(This originally appeared in the WFA MK Branch Newsletter) 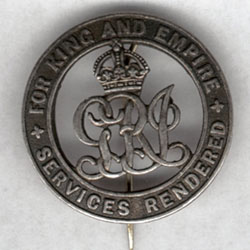 The badges were to be worn with civilian clothes and it was an offence to do so if not entitled. They are indeed of sterling silver, although as they were manufactured by the Royal Mint they bear no hallmark. They are 1″ in diameter and bear the Royal monogram GRI [George Rex Imperator] encircled by the inscription, ‘For King and Empire Services Rendered’.A branch member asked us to identify a badge his father found some years ago. With the aid of other members and the Internet, we discovered that this was a Discharge Badge, sometimes known as the Silver War Badge, Wound Badge, Services Rendered Badge or the King’s Silver Badge.

Over a million of these were issued, with an official certificate of entitlement. Initially they were given to servicemen who had been honourably discharged through wounds or sickness. The aim was to reward the man’s service, and to legitimate his civilian status when so many others were in uniform. After the Armistice, civilians who had served with the RAMC, female nurses, VAD’s and members of QMAAC could also apply, if they had been retired or discharged through wounds or sickness or on attaining the age of 51.

Each was uniquely numbered on the reverse and through these serial numbers, details of the recipients can be researched by checking the War Badge rolls. Those for the Army are available at the Public Record Office. Our researches have not yet uncovered where the others are to be found.

Similar badges were issued by dominion countries, including Canada.

If you have any items on which you seek further information, please feel free to bring them to a members’ meeting and show them around; between us, someone will probably be able to help and if not, we probably ‘know a man who can!’ Please do not send items by post. We cannot be responsible for loss or damage.

Much of this information was found on an Internet page prepared by Paul Hinckley whose copyright is duly acknowledged.