There are a total of 7 listed buildings situated in New Bradwell. Below you will find a description of each building. 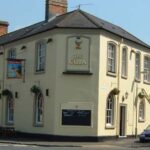 1. Situated off the West side of Bradwell Road, The Old Windmill was built in 1805 for Samuel Holman. It has a Limestone tower of 3 tapering stages with brick repairs. All machinery except crown-wheel intact.
Valuation at the time suggests the cost at approximately £500. He worked the mill until his death in 1825, inherited by his wife and son. By 1846, the mill was owned by Elizabeth Curtis and during this time operated by William Carr of Carr’s Mill, Haversham. It was bought in 1857 by Robert Adams of Bradwell Abbey and his son, Robert, ran the business until 1871. It has a stone tower, built from stone quarried locally, the footings of which were reinforced by a mound which acted as an elevated walkway to allow the miller to attend to the sails. Originally the mill had two types of sails, one pair of 52 ft. common sails and one pair of 52ft. spring sails. The renovated mill has four spring sails. Inside, the mill has three floors above ground level, the stone floor, the bin floor and the dust floor. The stone floor has two sets of millstones, one pair made from Derbyshire peak or grey stone were used to grind animal feed. The other pair are French burrs, a composite stone of very hard quartzite from the Paris region, for grinding finer flour for human consumption. An unusual feature of New Bradwell Mill is the fireplace. Only one other mill in Britain is known to have taken this risk as flour dust is very explosive. The mill finally ceased working in 1876 when the Railway Company bought adjacent land for the development of the Wolverton to Newport Pagnell line.

7. Nos 57 to 79 (odd) Nos 58 to 80 (even). Built 1853-61. All that remains of 3 streets known as Railway Cottages. Cottage terraces facing each other, formerly with service roads behind. Yellow brick with red brick quoins, string courses and cambered arches to doors and windows. Slate roofs with moderately projecting eaves. 2 storeys with 3 storey end blocks with hipped roofs. 2 windows each, sashes with glazing bars (No 74 casements). Plain paired doors some partly glazed. Large cruciform plan brick chimneys. Included chiefly for sociological interest. Nos 57 to 79 (odd) and Nos 58 to 80 (even) form a group.