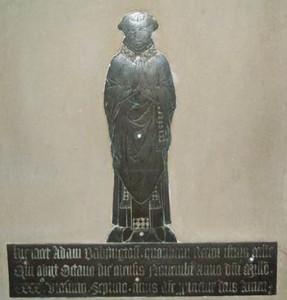 Adam Babington was Rector from 1423 to 1427 and is buried in the chancel of All Saints. He was presented by Thomas Chaworth and his wife Isabella and by Humphrey Stafford and his wife Eleanor (heir of Sir Thomas Aylesbury). He is commemorated in a brass which was originally set into the chancel floor but was removed to the south wall of the chancel in the Victorian re-ordering. The inscription reads: –