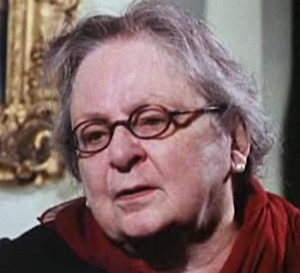 Dame Joan Evans,  (22 June 1893 – 14 July 1977) was a British historian of French and English mediaeval art, especially Early Modern and medieval jewellery. She was born at Nash Mills, Apsley, Hertfordshire, the daughter of antiquarian and businessman Sir John Evans and his third wife, Maria Millington Lathbury (1856–1944). She was half-sister to Sir Arthur Evans, excavator of Knossos in Crete. As the youngest member of a large family, she was frequently left in the charge of her Nannie, Caroline Hancock, and spent long periods of her childhood staying with Caroline’s parents in Milton Keynes Village. In her autobiography, ‘Prelude and Fugue’, written in 1964, she describes village life as it appeared to her as a child.

Caroline Hancock’s mother, also Caroline, was refered to as ‘Mother’ throughout the book, and indeed seems to have been more of a mother to Joan than her own mother. Daniel Hancock, the father of the family, was blind as a result of an accident in which he fell off a scaffold in his occupation as a carpenter and builder. Strangely, their oldest child, Amy, was also blind as the result of a childhood accident. Unlike her father, she was still very active and blindness hardly seemed a disability. The cottage in which they lived was situated behind Nurses Cottage on the south side of what is now Parneleys, but sadly was burned down in 1909. Together with an old barn, it was situated in Barn Close (No. 21, northeast of No. 20, in the 1789 and 1838 estate surveys).