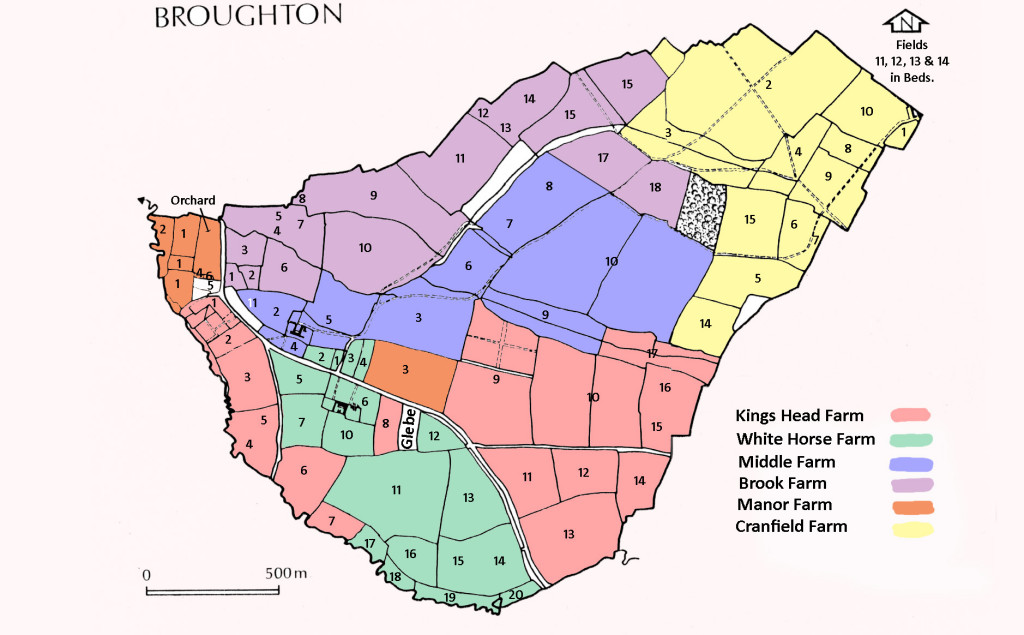 WARNING:
The following information was copied from a transcription carried out by the Archeology Unit of the Milton Keynes Development Corporation, and may contain some errors.

Survey, Valuation and arrangement of the Estate belonging to Miss Sarah Backwell at Broughton in the Co. of Buckinghamshire by Nath. Kent of Fulham Middlesex – June and December. 1779

Premises let to Mr Robert Holmes from Lady Day 1780 for term of 14 years for rent of £67. 10s. Od
Remarks
This tenant has done a great deal of the Repair to the House, which he had made very neat and comfortable but still a great more is wanting to the outer building and I should think it right for Miss Backwell to order it to be done as soon as possible so the expense of doing it will be considerably increased by delay.

Remarks
This tenant manages so well that I have but little to recommend on his Farm. The Warren indeed may be benefitted by a few oblique drains at the bottom of it and in some other parts the furrows should be opened to give a free discharge into the ditches but there is no other defect in the tenant’s management worth speaking of.

Remarks
The Great Ground is in a most slovenly condition, quite overgrown with Ant Hills which ought to be pared off thrown together in heaps to rot and mixed up with Lime Muck or Ashes to make a proper compost for it.

The contents and value of the land are as follows:

Remarks
This farm is considerably reduced by the late arrangement but is still sufficiently large for any reasonable way. It has been for some time past exceedingly ill managed, but will I trust improve under its present disposition. The Great Ground ought to be divided into two which will not only make it more convenient for occupation but will drain off the Springs which hang upon a part of it, and at present, do considerable damage.

The tenant has have to break up and use in tillage the Hanghill piece, which will afford him a regular course of three fields in Arable and being but ordinary pasture will as it is Tithe free, be of more service to the estate.

Brook Farm
The buildings consist of a Farm House, a cottage adjoining, two barns, a stable, Cart House and Pigs Cot.
The contents and value of the land are as follows:

This farm is let to Hugh Willet Cowley from Lady day 1780 for the term of twenty on years at the Rent of £215.00
Remarks
This farm is exceedingly well tenanted which was one reason for my augmenting it. The two Barn Closes are allowed to be broken up but are to be laid down at least seven years before the expiration of the terms. If there are any defects to be pointed out it is the want of keeping the Furrows open, and suffering the thistles in some places to seed.