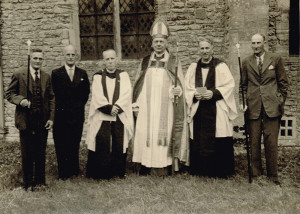 John Franklin Cheyne was the first Rector to be appointed to the combined benefice of Milton Keynes and Broughton. He served from 1951 to 1960. He was appointed following protracted negotiations between the Society of Merchant Venturers and the Diocese of Oxford. The advowson (ability to appoint a Rector to a parish) had passed to the Society along with ownership of the estate and the Society took its responsibility very seriously. A major factor in the appointment was to find someone who would be prepared to live at the rectory at Milton Keynes with its attendant expenses, and the joining of Broughton parish was an attempt to increase the stipend of the new Rector to a viable level.

Eventually it was realised that the Rectory could not be kept going without ‘independent means’ so plans were drawn up to build a modern rectory in London Road, Broughton. This was occupied by the next rector, John Bromley.   Wootton’s 250-year-old rectory was sold by the diocese.

There were worries that Revd. Cheyne would be too ‘Anglo-Catholic’ for the rather ‘low church’ parish, but in the event he was popular, and his love of music resulted in the restoration of a choir in the services involving both adults and children.