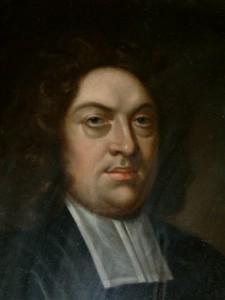 Lewis Atterbury’s portrait which now hangs in All Saints church, but was formerly in the Rectory.

Lewis Atterbury was Rector from 1657 to 1693. He was the son of Francis Atterbury, Rector of Middleton (Milton) Malsor in Northamptonshire. He entered Christ Church, Oxford in 1647 and took the degree of MA in 1651 by dispensation from Oliver Cromwell who was Chancellor of the University. Although appointed Rector of Milton Keynes during the Commonwealth period, he took care to obtain the King’s title in 1660 after the Restoration, becoming chaplain to Henry, Duke of Gloucester, the King’s brother, at the same time. He was the father of Francis Atterbury who was born at Milton Keynes and was later to become Bishop of Rochester. Francis had Jacobite sympathies and was eventually forced to go overseas to Brussels, and later, Paris.

Lewis Atterbury was of a litigious nature and spent much of his time in dispute with the Finches and their tenants over glebe land in the parish. He was drowned in Broughton Brook in December 1693 on his return from visiting his lawyers in London. Even today, Broughton Brook, which is very shallow in summer, can swell to a depth of two metres after heavy rain in winter.