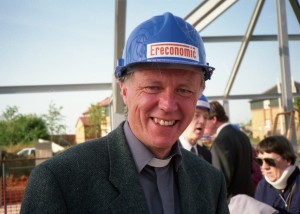 Norman Cotton was the first Rector of the combined parishes of Milton Keynes, Broughton, Wavendon and Walton (1982-1992). The new parish took the name of Walton, but this was not decided upon immediately. The old parish of Walton was the smallest of the four with not many inhabitants, so its choice of name for the new big parish upset the least number of people!

Norman Cotton was much loved by all in the parish, and although he lived at Wavendon in the extreme south of the parish, all felt that he cared for them wherever they lived. During his period of office much of the New City area was becoming ecumenical to encourage all denominations to worship together, and Norman was among the first to set up a Local Ecumenical Partnership to include Baptists, Methodists, Roman Catholics and United Reformed Church members as well as Church of England. Wavendon was in a different Roman Catholic parish, so All Saints was for a time the only building to have a sharing agreement with the Catholics.

Other developments at the time included the setting up of a new church at Kents Hill, ‘Christ the King’, which was to be shared between the Roman Catholics and the other four denominations. The first ministers to work there were a Baptist and a Roman Catholic Priest. At Broughton, where the population was still very small, St Lawrence’s church was made redundant and passed into the care of the Churches Conservation Trust which was better able to preserve the priceless wall paintings.

Norman was ‘Godfather’ to “A Tale of Two Villages”, the community play at All Saints in 1991, which gave its name to the Two Villages Archive Trust. His powers of persuasion meant that many non-churchgoers were involved, and the play was a means of binding all together.