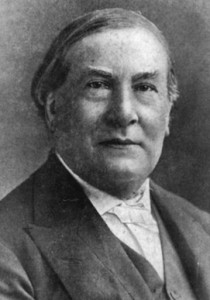 The Honourable Wingfield Stratford Twisleton Wykeham-Fiennes was Rector from 1880 to 1910.  He was the fourth son of the 16th Baron Saye and Sele, and was a typical example of a younger son of an aristocratic family going into the church.  He was educated at Winchester College and New College, Oxford (both Wykeham foundations).  The Two Villages Archive Trust has copies of his parish magazines from 1893-7, which reveal a kindly, if authoritarian, man who loved his parish.  His accounts of the happenings in the parish are an invaluable record of life here in the late nineteenth century.  As a young man he was a great cricketer and encouraged the Milton Keynes cricket club which still plays in the village.  He had five children Gerard, Alberic, Caryl, Winifred and John. Alberic was the great-grandfather of the actors Ralph and Joseph Fiennes, and theatricals featured quite often in Wingfield’s accounts of village life.  Winifred, the only girl, had an unhappy early life.  She was married by her father to the Reverend Percy Riddell Allnutt in 1894 but the marriage was annulled in 1909.   However, she married again in 1913 to Brigadier John Stuart (Jack) Omond M.C. MBE, of the Royal Army Ordnance Corps and we understand they were very happy together.