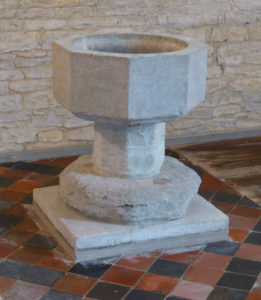 The font, which is thought to date from the fifteenth century, was banished to the churchyard as part of the Victorian restoration. It was used there as a flower trough! It was returned to the north chapel in the church in about 1980 to prevent further weathering. George Lipscomb, the nineteenth century historian, decribes the font as having its basin decorated with slender pillars, although it is difficult to imagine how this can have been. Its simplicity suits the style of the church, and in June 2013 it was returned to its rightful place at the west end of the central aisle of the nave. Its rather ornate Victorian replacement found a new home in the Christian Faith Garden at the local prison.