Bury field is a vast area of common land situated to the north west of Newport Pagnell. It is common land mentioned as early as 1276 as common pasture. It could have been a remnant of the Common Fields from the Saxon period. Later on in its history it was connected with Tickford Priory. In 1547 when Edward VI came to the throne the Manor of Newport Pagnell passed to him and as a consequence in 1551 he bestowed the Rectory with all that went with this to his sister Elizabeth. This appeared in a survey of the Manor. In 1627 it passed to Sir Francis Annesley with all tolls and profits from fairs and markets in the town. In 1712 before the common was opened in the Spring a handbill was printed for circulation setting out common rights. It stated that the inhabitants of the town – “were used to put their cattle into a field there called Bury Field when they would yearly after the third day of May there to stay and pasture until the Feast of St. Thomas the Apostle (which is December 21st) to pay therefore to the Lord or his farmer the sums of money undermentioned….”  Then it listed the charges:-

a mare or gelding 20d

This applied until the Feast of St Michael the Archangel – September 29th and thereafter until December 21st at half these prices.

Local historian Newman Cole stated that one of his ancestors was prosecuted for putting geese in the field and spoiling the grazing for the cattle.

In 1835 a committee was set up to investigate an area of the site to build a home for the sick and poor, but it didn’t come about and instead a site on London Road was chosen and this building became Renny Lodge – a workhouse.

Over the centuries it has been encroached upon several times but still retains its main character. At the centre of the field are two cuttings all that remains of a Victoria railway line that was never completed. Along by the Queens Avenue entrance across to Mill House and adjacent to Union Street are the remnants of a Civil War defensive boundary and over by top meadow an ancient burial mound. At the centre of the common lies a small wooded copse, and the remains of a walkway known locally as ‘Christmas Walk’. 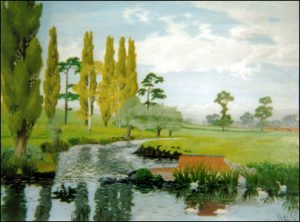 A painting of Bury Field

During the 20th Century the field was used for the war effort when some parts were ploughed and used to grow much needed crops. After the war the uses of the field were many fold and used by many of the towns people for recreation. When the field froze over skating would take place and during the summer Thurston’s Funfair would arrive and take centre stage. In the sixties the field was used by the Football and Cricket Clubs. Newport Pagnell Wanderers played their homes matches on the field the pitch now overgrown. The town Carnival was held there attracting many people with events such as scrambling, a parachute drop, and even a Civil War reconstruction battle. The carnival float procession always ended in the field where the judging took place. A famous guest would be on hand for this task and the carnival lasted a week in those days. But, sad to say, the field does not stage any of these events now as locations have been found elsewhere which is such a shame. The field is still used for grazing cows as it was originally intended and people walk and exercise their dogs there. Bury Field holds so much potential and could be used for so much more. Newport Pagnell has grown so much over the last three decades and the common remains but just how many of our newcomers know of its existence and potential. Who knows what its future holds at the mercy of the 21st century.