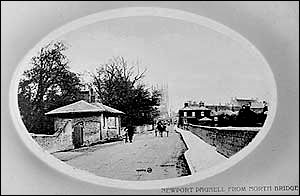 This bridge is a single span stone bridge, which allowed horse-drawn vehicles to pass in and out of town. Originally there was a ford at this point, and then later a timber bridge stood alongside the ford. This wooden bridge was rebuilt in stone around 1380 and was made up of three arches.        It survived until 1810, when the present North Bridge was built. A single arch of the 14th century bridge can still be seen in Ousebank Gardens.
In the process of putting together the planning for the building of the present bridge authority was given to build a toll house with gates near the bridge to take tolls from anyone wishing to cross with vehicles or animals. The money raised was to pay costs incurred by the bridge.                There was initially a temporary building. The present bridge was completed in 1809 and carries this date on the keystone of the arch on its west face. The present toll house was built. The bridge has undergone repairs since. In 1837 gas was used for lighting on the bridge instead of oil thanks to a gas works in the town. The front bay window of the toll house was used as a lookout so that no potential toll collection was missed.