Until the 1960s Newport Pagnell had a railway linking the town to Wolverton. The line became part of the London North Western network and was simply a branch line between the two towns. The line provided transport for workmen, who had employment at the railway works in Wolverton and for schoolchildren travelling to school in Wolverton. The line also brought goods from Wolverton and conveyed them from Newport Pagnell to Wolverton. This was particularly important for the mills in the town. The line was also very useful for transporting livestock; and cars and vehicles from the  Salmons vehicle production works in Newport Pagnell. This car plant in the town eventually became the Aston Martin Lagonda factory.

The train, which used the line, was affectionately known as the ‘Newport Nobby’. 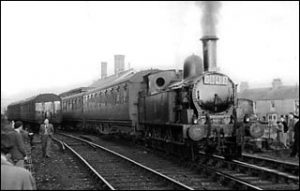 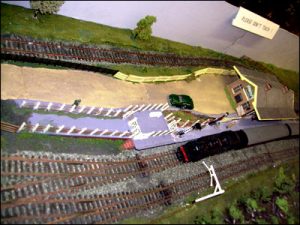 Here is a brief account of Newport’s railway history.

THE GOODS OPERATIONS AT NEWPORT PAGNELL

The goods operation was east of the station, having a siding serving a corn, cattle cake, coal and lime merchant, who was also a brick maker.  With the filling in of the canal basin the goods yard was built on the resulting land. The railway was then in a position to take over the business there.  However this was not as plentiful as had been hoped. South of the passenger platform were facilities to serve flour production, once served by the canal. There were 2 flour mills at Newport which had their own  railway sidings connected to the branch line. Messrs Price & Goff had their own loading shed established in 1870 with its own turntable.  This was all at right angles to the 2 goods sidings. Another siding did not enter the goods yard at all but diverted from the station before the platform crossing  over the shed line and out of the station altogether to reach Hives & Sons building. This was taken over in 1885 by Francis Coales & Son. For the information of the working of this private siding we are indebted to John Coales words:  Aston Martin cars were loaded at the carriage dock at the back of the passenger station onto a short line, which terminated in a ramp. In the days of  Salmons and Sons chassis and engines were carried in special trucks brought to Newport by train. These were off-loaded and taken by horse-power to the  Salmons and Sons works in Tickford Street, where the car bodies were added. Once the cars were finished, they were conveyed by train to all parts of the country. All the coal used in Newport and the surrounding villages came in by train. It was the main commodity with tonnages of 7,269 for 1874 the final complete  year for the Newport Pagnell Railway. Cattle were carried from Newport. Farmers would drive their cattle from the fields along the road to the station and then put them into the station cattle pen  ready to be loaded onto the cattle trucks on the trains. Normally the daily goods train was worked by a tank engine. Engines with tenders infrequently pulled goods trains on this line. It was usually in the middle of  the morning when the goods train came in, and then for about an hour the engine would shunt all the goods trucks so the empty ones could be taken back.  Even at the end goods trains could be handling as many as 60 wagons in a train on the branch. However, from 1966 when Bletchley closed to steam,  Class 24 diesel-electrics hauled the daily freight, which was mostly coal and scrap metal. The goods operation ceased on 22nd May 1967, though the siding to Coales, that left the station and crossed the road at Newport, had been disconnected in the late 1950s. The branch line continued to serve the people of Newport Pagnell until the storm clouds gathered in the early 1960s. The line was included in the Beeching report of 1962 which concluded that, since 30% of the railway network carried less than 1% of the total passenger traffic, much of it should be closed. The residents of Newport Pagnell resisted the closure, demanding an enquiry which took place on 7 June 1964.  Despite many objections, it was determined that the line would close. The last passenger service was the 5:34 pm train from Newport Pagnell on  5 September 1964, just under a century after the line opened to passengers. The mourning of the line was so great that a bucket of water was poured over a double dressed as Richard Beeching, the man commonly associated with the closure of over 4,000 miles of the British railway network.  The crowd cheered as this happened, a mark of the public’s’ feelings about the closure. Once the line ceased to operate the tracks were lifted. Part of the trackbed is now used by the Milton Keynes Redway  system, which is the network of  cycle and pedestrian routes that serves the Milton Keynes urban area.                                      Here is picture of Newport Pagnell railway station on the final day. 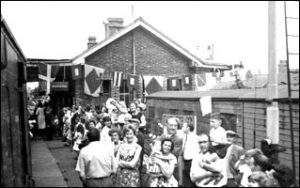 Present state: The site is lost under Shepherds Close, a new housing development.                  The Newport Pagnell Railway Act was passed in 1863 and the following year the               Newport Railway Company bought the short branch canal with the intention of using the route for their new railway line into Newport Pagnell.