George Hawkes Field was Rector from 1914 to 1950. With the outbreak of the First World War, he very quickly volunteered to be an Army Chaplain serving with the Leicestershire Regiment, and he was thus away from the parish for several years. He maintained his army connections, and when the Second World War was declared, he became the Civil Defence Organiser for the district (see the War Book). 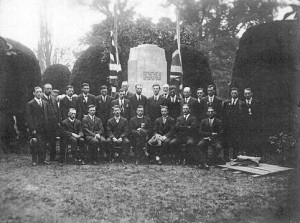 Dedication of the War Memorial

In 1921 George Hawkes Field organised the provision of the War Memorial in the churchyard, and he is pictured in the centre of the front row at the dedication ceremony.

He was liked and respected as a Rector although there were rumours of rather too close a relationship with a local girl who became an assistant teacher at the school and who boarded at the rectory.